As of this week, Estonian Air serves Trondheim in Norway from its Tallinn base. Scandinavia is a key market for the Estonian national airline whose top three routes are to the Scandinavian capital airports – notably all hubs for its minority shareholder SAS.

anna.aero’s recent review of European airport traffic trends in the first half of 2011 identified Estonia (basically Tallinn) as having the fastest passenger growth rate of any country in Europe. However, much of this is down to the launch of several Ryanair routes during the period December 2010 to March 2011. National carrier Estonian Air has not been idle and has also been broadening its network. This week saw the launch of a new route to Trondheim in Norway, and the resumption of services to Vilnius in Lithuania, operated by its regional subsidiary Estonian Air Regional. 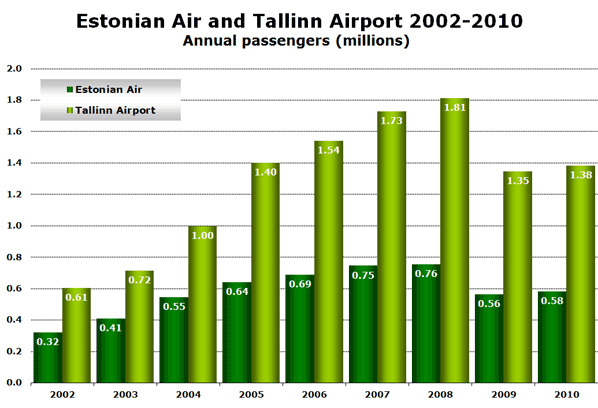 According to the airline’s website, Estonian Air’s fleet comprises just six aircraft: two 737-300s (with 142 seats), two 737-500s (with 118 and 120 seats) and two CRJ-900s (with 88 seats). Estonian Air Regional operates two Saab 340s with 33 seats. The CRJ-900s joined the fleet earlier this year, with a third to follow in 2012. Using this fleet, a total of 18 destinations are now served non-stop from Tallinn with the Scandinavian capitals of Copenhagen, Stockholm and Oslo leading the way. 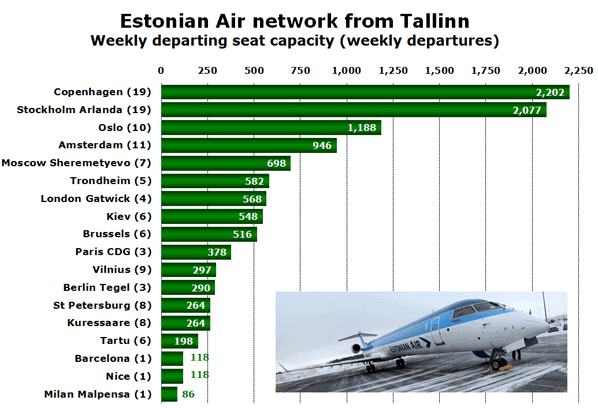 Direct competition is provided on just two routes by airBaltic (to Vilnius) and Norwegian (to Oslo), with Ryanair also serving Oslo Rygge. However, there is considerable indirect competition on routes to Barcelona (Ryanair to Girona), Brussels (Ryanair to Charleroi), London (easyJet to Stansted and Ryanair to Luton), Milan (Ryanair to Bergamo), Moscow (UTair to Vnukovo), and Stockholm (Ryanair to Skavsta).

A new route to Jyväskylä in Finland has been announced for the start of the next summer season on 25 March 2012. Flights will operate daily on weekdays and twice on Sundays.

The airline’s ownership structure continues to evolve. From its inception in 1991 until 1996, it was a state-owned airline. That year, the government sold 66% of the airline, with Maersk Air (of Denmark) acquiring 49% and an Estonian investment company (Baltic Cresco Investment Group) taking the remaining 17%. In 2003, Maersk Air sold its 49% share to the SAS Group. Last year, SAS reduced its share to just 10% and the Estonian state now has the remaining 90%.