August 2011: Not a route launch, but the arrival back of the city’s Hannover 96 football side – appropriately sponsored by TUI – after successfully (and surprisingly) qualifying for the UEFA Europa League after knocking out Seville. Winger Sergio Pinto, and team coach Mirko Slomka feature in the welcome on the tarmac.

In April 2010 Lufthansa’s low-cost subsidiary germanwings established a base at Hannover airport and launched flights to 16 destinations. However, despite this traffic at the airport grew by just 1.8% last year to just over five million passengers, making it Germany’s ninth busiest airport. However, passenger numbers are still significantly below the peak of around 5.6 million annual passengers that the airport handled between 2005 and 2008. 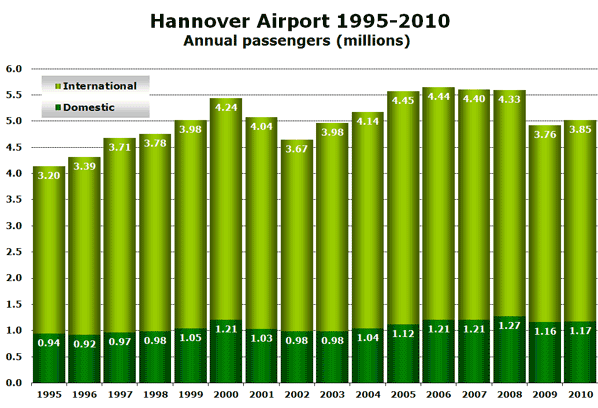 Passenger numbers in the first seven months of 2011 are up 7.6% (just above the national average of 6.9%), driven by 12.2% growth in international traffic to European destinations.

With neither Lufthansa nor airberlin considering the airport as a base, no single carrier is dominant in terms of market share. Lufthansa only operates two domestic routes (to its Frankfurt and Munich hubs), while airberlin serves Munich and Stuttgart with multiple daily flights as well as serving a range of international destinations, notably Palma de Mallorca, Vienna and Zurich.

The leading non-German airlines in terms of weekly seat capacity are Swiss (to Zurich), Turkish Airlines (to Istanbul) and KLM (to Amsterdam). Just behind these carriers is Flybe which offers flights to four destinations in the UK (Birmingham, Manchester, Newcastle and Southampton). Other flag-carriers serving their hubs include Aeroflot, Air France, Brussels Airlines, Czech Airlines, SAS. British Airways is notably absent (along with Alitalia and Iberia), though London Heathrow is served by bmi British Midland with three daily flights.

According to German government statistics the number of passengers from Hannover on domestic flights last year exceeded any other country market. Spain and Turkey were the leading international country markets and these three markets combined accounted for half of all passenger movements at the airport in 2010. 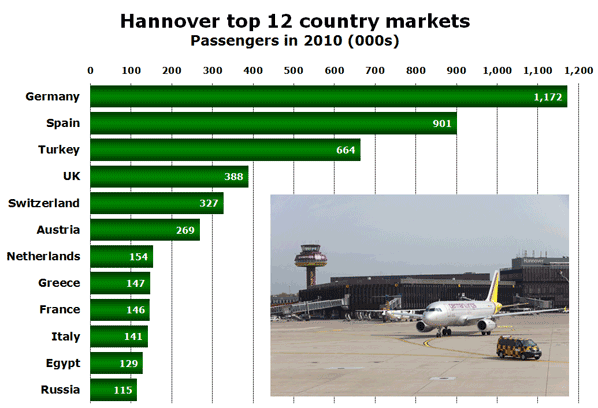 Last month the local football team Hannover 96 (whose shirt sponsor is TUI) qualified for the UEFA  Europa League group phase by beating Seville 3-2 over two legs. The TUIfly 737-800 on which the team were travelling back to Hannover was greeted by a fire truck salute, normally reserved for the launch of new routes. In the group phase Hannover 96 will play against FC Copenhagen (Denmark), Standard Liege (Belgium) and FC Vorskla Poltava (Ukraine).