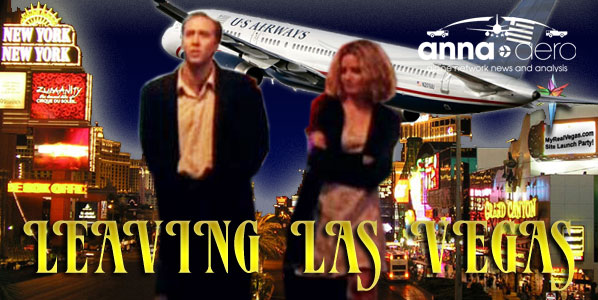 US Airways was still the market leader at Las Vegas in the early 1990s when Mike Figgis made the romantic film which gave us this helpful cliché. But by 2000 Southwest had already assumed dominance, growing share of the passenger market to just under 40% in 2010.

The recent announcement that US Airways will close five of its nine remaining routes at Las Vegas McCarran means that the airline (which took over America West in 2005) has cut back its route network from over 60 routes just four years ago to just four routes in 2012; Charlotte, Philadelphia, Phoenix and Washington Reagan. Even as recently as 2008 a total of 60 destinations were being served non-stop by US Airways at McCarran. This was almost halved to just 31 in 2009 and halved again to 15 in 2010. During 2010 routes to Chicago O’Hare, Fort Lauderdale, Orlando, Pittsburgh, San Diego and Santa Ana were axed, leaving just nine routes. 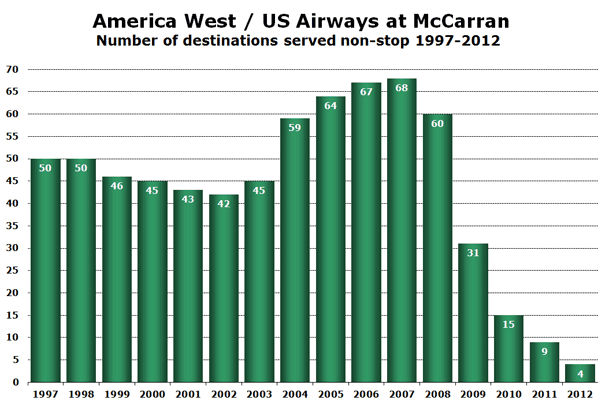 Now it has been confirmed that Boston, Dallas/Ft. Worth, Fresno, Los Angeles, and San Francisco services will end before the end of the year. Competition on each of these routes is summarised in the table below.

On none of these route is US Airways the leading carrier in terms of weekly flights and it faces low cost competition of some sort on each of them.

US Airways traffic peaked at McCarran in 2006

Prior to the rise of Southwest, America West was the biggest carrier in Las Vegas in the late 80s and early 90s. However, by the late 90s Southwest was the clear market leader at McCarran and has grown its share of the passenger market from 30% in the late 90s to just under 40% in 2010. 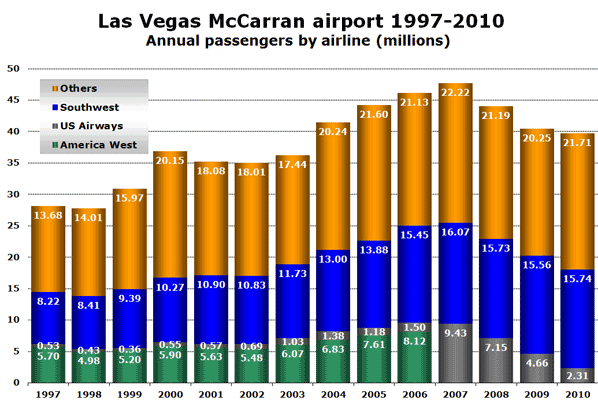