Lufthansa reconsidering bmi’s future after latest financial results; which airlines would want the routes and slots?

With lots of unsurprising speculation that Lufthansa wants to sell the astonishingly loss-making bmi British Midland International to the right buyer, this week’s anna.aero takes a closer look at elements of the airline’s network. This follows from our recent analysis of bmibaby and our look at bmi’s London Heathrow base.

For contractual reasons, a reluctant Lufthansa was famously forced to buy bmi founder Sir Michael Bishop’s controlling shares in July 2009. For the decade up until 2007 bmi had posted thin cumulative profits of just over £40m (€45m). However, the acquisition of BMED (previously known as British Mediterranean) in 2007, while considerably expanding bmi’s route network, seems to have caused, or coincided, with a period of appalling losses. In just three and a half years, from the beginning of January 2008 to June 2011, the bmi group has run up cumulative losses of almost £580m (€640m), a quite staggering figure for an airline of its size. Lufthansa control and expertise has failed to stem the losses. 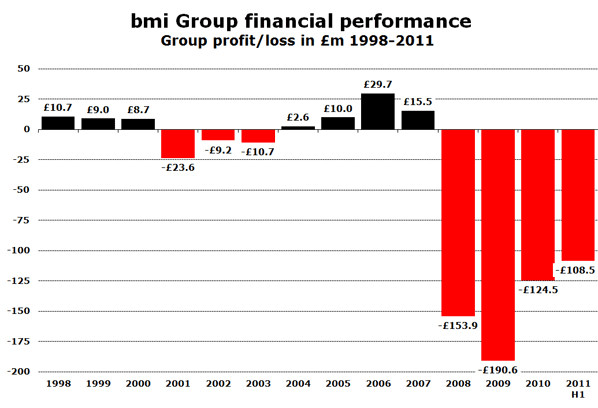 UK and Middle East network – an unfortunate combination in 2011

Having a network that consists primarily of UK domestic and specialist Middle East routes when the UK is undergoing a significant economic downturn and the Middle East is particularly unstable has hit the airline hard this year, resulting in Lufthansa reporting that bmi’s operating margin in the first half of this year was a woeful -26%. How this breaks down between bmi mainline (which operates 27 Airbus aircraft), bmi Regional (which operates 19 Embraer regional jets) and bmibaby (which has a fleet of 14 737s) is sadly not revealed.

In terms of weekly ASKs (Available Seat Kilometres) bmi Regional accounts for only 4% of the airline’s capacity, bmibaby is responsible for a further 34% and bmi mainline the remaining 62%. The Heathrow to Riyadh route (operated six times weekly) generates 50% more ASKs than the entire bmi Regional operations. bmi’s network from Heathrow of 23 non-stop destinations and seven other cities can be broken down by geographic region, and is summarised in the table below:

The most recent new routes from Heathrow are Bergen, Casablanca, Marrakech and Stavanger, which all started at the beginning of April, while Nice re-entered the bmi portfolio on 25 August. Another Moroccan route, to Agadir, has been announced to start at the end of October and today, bmi announcd a thrice-weekly service to Amritsar in India from mid-October. A new route to Tripoli operated for just one day last February, just as the country’s revolution got underway.

At anna.aero we usually avoid speculation, but in the case of bmi’s future we will make an exception. bmi’s biggest asset is without doubt its portfolio of slots at Heathrow where it has an 8% share of all aircraft movements (compared with 43% for British Airways, and 5.5% for Lufthansa itself).

Consequently, a tie-up between with bmi mainline and Virgin Atlantic is something that is speculated now, and has been before. But it’s not one that anna.aero admires – the two airline networks don’t overlap at all – but they are not complementary either. Virgin Atlantic likes strong business and leisure combinations on the North Atlantic, and to upscale places like Dubai, Johannesburg and the Caribbean. Destinations like Tehran, Khartoum and Damascus just don’t seem to fit the Virgin Atlantic psyche – although obviously highly-regulated routes like these can be very popular and profitable at times of stability.

In the meantime, Singapore Airlines wants to divest itself of its 49% shareholding in Virgin Atlantic, so there remains an opportunity for someone very rich to find a new, third way of combining the two carriers into a stronger competitor to British Airways at Heathrow.

British Airways itself will be very interested in the slots, but even if it climbed a mountain of regulation and acquired both Virgin Atlantic and bmi, the sum of slots would still represent just 54% of flights at Heathrow, compared with Lufthansa’s 64% at Frankfurt, and Air France’s 58% at Paris CDG. However, it seems unlikely that Star Alliance Lufthansa would ever let bmi fall into the hands of oneworld British Airways.

So while Lufthansa drums its fingers, impatiently supporting and defending bmi’s network at Heathrow and elsewhere, it clearly can’t do this for much longer given the state of the markets bmi  operates in, and what is likely to happen to them in the near future. The suitors are not obvious, and even if they were, they don’t have any chance of borrowing the necessary money.

The easiest way out of this is to find someone very rich. Qatar Airways would like to expand. The half-owner of Qatar Airways, the sovereign wealth fund Qatar Investment Authority has some $130 billion to invest over the next 5-6 years and bought Harrods for £1.5 billion ($2.4 billion) last year. When talking of it recent purchase of a third of Cargolux, Qatar Airways’ plain-speaking CEO Akbar Al Baker laid down three conditions for acquiring other airlines which bmi mainline does not exactly fit: “I’ve always said that we will only be interested in other airlines if they are healthy, if they are well-established, and add value to Qatar Airways.”

bmi is not a conventional definition of fitness, but it has been around 50 years, and its Middle East and CIS routes from London would make a very exotic and fascinating combination with Qatar. Lufthansa may find non-alliance aligned Qatar Airways a less-objectionable owner than British Airways and, while there are obscure legal obstacles to EU airlines being owned by non-EU entities, there are also precedents of these being overlooked, depending on the strength of objections, job losses etc.