Icelandair adds Denver (in May 2012) to expanding US network; US – Iceland market grew by 13% last year Icelandair this week announced that Denver would become its ninth North American destination when it launches flights on 11 May next year from Reykjavik (Keflavik Airport). Flights will operate four times per week using the airline’s 757-200s. According to Denver International Airport Icelandair is the first new carrier to initiate transatlantic service at the airport in more than 10 years, and becomes only the third in total, joining British Airways (daily flights from London Heathrow) and Lufthansa (daily flights from Frankfurt). Icelandair’s existing transatlantic services from Reykjavik are to Boston, New York JFK, and Seattle (launched July 2009), with seasonal service to Washington Dulles (re-launched May 2011), Minneapolis / St. Paul, Orlando Sanford, and Halifax (launched May 2007) and Toronto (launched May 2008) in Canada. 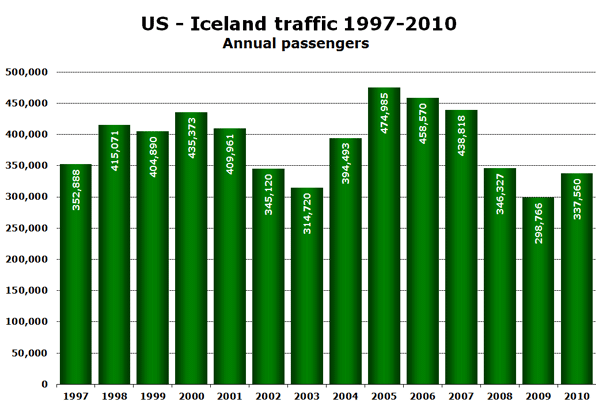 A look at passenger numbers on flights between the US and Iceland since 1997 reveals that traffic peaked in 2005 with almost half a million passengers before falling dramatically to just under 300,000 passengers in 2009 before rising by 13% last year, the first annual increase since 2005. IN 2010 passenger numbers at Keflavik Airport were just under 1.8 million, suggesting that the US market accounts for just under 20% of the airport’s traffic.

“We were thrilled to choose Denver from a short-list of potential new gateway cities, as we feel it is a natural fit for Icelandair. Denverites will love the nature, lifestyle and culture of Iceland, while Icelanders will feel at home with the landscape, active lifestyle, and independent philosophy in Denver,” said Birkir Holm Gudnason, CEO of Icelandair.

Thorsteinn Egilsson, General Manger of Icelandair the Americas continued, “Savvy travelers of Denver will now have a fresh alternative when travelling to Europe. Icelandair is happy to enter this city with competitive airfares and convenient routes to Iceland and onward.”

“We are elated to have been chosen as Icelandair’s ninth North American market,” said Kim Day, Aviation Manager for Denver International Airport. “As the fifth-busiest airport in the United States, Denver International Airport serves more than 160 destinations nonstop. Our airport is not only the gateway to the beautiful state of Colorado, but is also a strong US hub, providing easy access to many points beyond Denver.”

“I am looking forward to the relationship between the City of Denver and Icelandair, and to personally welcoming the first flight from Reykjavik,” said Denver Mayor Michael B. Hancock. “This flight will allow us to continue to bring new global opportunities to Colorado and to stimulate growth in our economy. It will also open our doors to new markets and allow our business and leisure travellers originating in Denver to enjoy an easy one-stop connection to Scandinavia, the UK and Europe.”

“Tourism is one of the region’s biggest potential growth markets and is already Denver’s second-largest industry, generating $3 billion in annual spending while supporting 50,000 jobs,” said Richard Scharf, president and CEO of Visit Denver. “A new nonstop, transatlantic flight is a huge selling factor for Denver. In recent years, the convention industry has seen its largest growth come from international attendees. Making Colorado easily accessible to visitors from Scandinavia, Europe and the U.K. will attract large international conventions and open the region to new opportunities.”

“We always believed that a third carrier out of Denver could serve northern Europe and Scandinavia, where business synergies have increased over the last several years,” said Tom Clark, executive vice president of the Metro Denver Economic Development Corporation. “The addition of Icelandair as our newest carrier affirms the confidence that northern Europe has in the metro Denver and Colorado markets.”

“Attracting international guests to visit Colorado’s world-class ski resorts has been a long-standing priority of Colorado Ski Country USA,” said Melanie Mills, president and CEO of Colorado Ski Country USA. “The Icelandair service will really enhance the options for Colorado-bound skiers from Scandanavia, Europe and Iceland, helping to make Colorado an even more attractive winter holiday destination. Skiers will help to balance out the seasonality in traffic from these markets. We are proud to have worked in partnership with our business friends in Denver to attract Icelandair.”