Knock gets weekly Düsseldorf service next summer; Ireland – Germany market trebled between 2002 and 2008 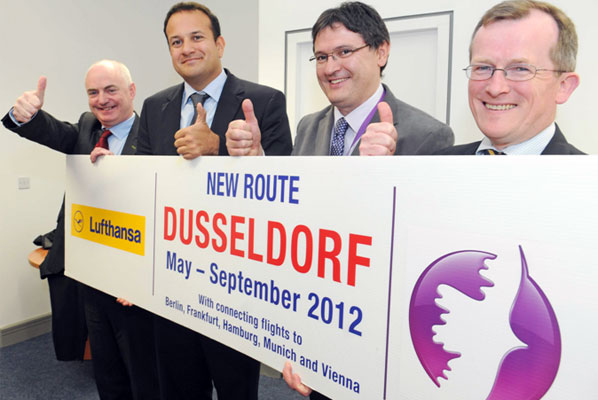 “We are confident that this will be the start of significant expansion by Lufthansa at this airport in the coming years” said Joe Gilmore, Managing Director, Ireland West Airport Knock. Holding the announcement: Peter Hynes, County Manager, Mayo County Council; Irish Minister of Transport and Tourism, Leo Varadkar TD; Gilmore; and Niall Gibbons, CEO, Tourism Ireland.

Ireland West Airport Knock this week announced that Lufthansa will operate weekly (Saturday) services from Düsseldorf between 7 May and 29 September. Connecting services to the German cities of Berlin, Frankfurt, Hamburg and Munich will also be available for booking as part of this new service. This will be Knock’s only scheduled service to Germany. 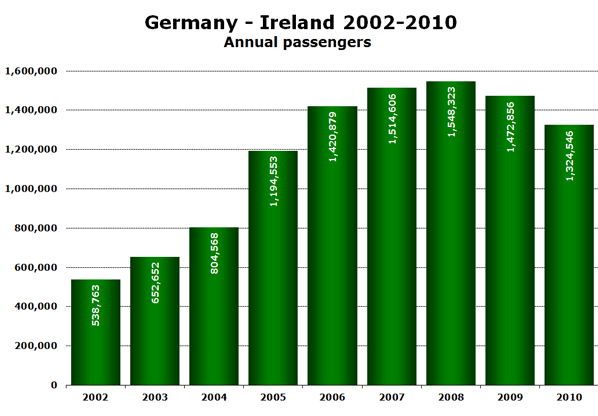 Between 2002 and 2008 passenger numbers between Germany and Ireland virtually trebled from 540,000 to 1.55 million, thanks to the spread of low-cost air travel. However, in 2009 the market declined by 5% and last year the market fell by a further 10% though passenger numbers in 2010 were still twice as high as in 2003.

This September four carriers operate scheduled services between Germany and Ireland; Aer Lingus, germanwings, Lufthansa and Ryanair. However, while Aer Lingus and Lufthansa have added capacity since the summer of 2008 (and germanwings has remained virtually unchanged), Ryanair has cut its capacity by over 60%.

Commenting on the new Knock route announcement, Minister for Transport, Tourism and Sport, Mr Leo Varadkar TD said “I would like to congratulate the team at Ireland West Airport Knock for delivering this new route, which will benefit the whole region and has huge significance from a tourism point of view. Germany is a key market for Irish tourism as German tourists tend to stay for an average of a week at a time and travel more widely. This is a great example of how close co-operation between the transport and tourism sectors can deliver a successful result.”

Joe Gilmore, Managing Director Ireland West Airport Knock added “We are absolutely delighted to welcome the world’s fourth largest airline, Lufthansa, to Ireland West Airport Knock. Germany has long been identified as a key strategic market for this airport but also for the Island of Ireland from a tourism perspective and we are delighted that Lufthansa have chosen our airport to operate new services to and from Germany in 2012. Over 200,000 Germans visit the West of Ireland every year and we urge our trade and tourism partners to get behind these new services and ensure their success in 2012 as we are confident that this will be the start of significant expansion by Lufthansa at this airport in the coming years”.