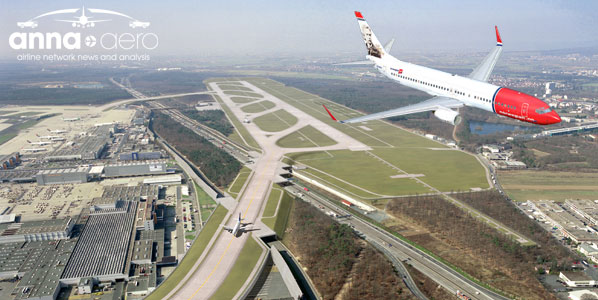 Norwegian shows that there now is space for low-cost carriers in Frankfurt as the airport's new runway creates additional capacity when it opens at the start of the winter season. So far, Norwegian has announced a route from Copenhagen, but unless there will be further announcements, Frankfurt will be the only German airport in Norwegian's network that it does not serve from Oslo.

The gradual phasing in of additional runway capacity at Frankfurt airport from the start of the winter season has encouraged Norwegian to launch daily (except Saturday) flights from its base at Copenhagen starting on 3 November. No plans have yet to be announced to serve Frankfurt from its other bases in Oslo and Stockholm, but this would appear to be the next logical step. Currently all three routes are a duopoly between fellow Star Alliance members Lufthansa and SAS, with the two airlines operating a total of between seven and eight daily flights.

Frankfurt will become Norwegian’s fifth German airport in its network as it already operates flights to Berlin Schönefeld, Düsseldorf, Hamburg and Munich. The carrier’s operations from these airports are summarised in the following table showing current weekly frequency and the route launch date.

All four of these German airports are served from Oslo, two from Stockholm and one (Berlin) from Bergen and Stavanger. Frankfurt will become Norwegian’s first German destination from Copenhagen.