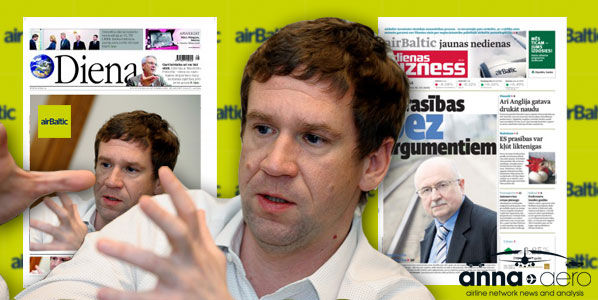 The would-be owner of airBaltic: London-based banker Vladimir Antonov and his Convers Group: “I know for certain that the operations of airBaltic will not come to a halt.”

Yesterday, airBaltic filed for bankruptcy protection – something that might be concerning to the 62 airports served by this airline’s unique hub and spoke system, which is particularly strong at linking EU destinations with Russia and other former Soviet countries.

airBaltic’s troubles in a nutshell

The current shareholder dispute is certainly curious – airBaltic is 52% majority-held by the Latvian government, but its most influential, hands-on shareholder is Baltijas Aviacijas Sistemas (BAS, or Baltic Aviation System). The government believes BAS is effectively controlled by Russian billionaire and London-based banker, Vladimir Antonov and his Convers Group, using a variety of techniques including offshore vehicles (Antonov is also much in the news at this time for his attempts to buy the struggling car manufacturer Saab, across the Baltic Sea in Sweden). For the government, Russian ownership is sensitive, both in Latvian and EU terms – non-EU nationals are not supposed to own controlling airline shares.

Interestingly, Antonov freely admits ownership of BAS on his website. Furthermore, airBaltic’s rapid expansion has mainly come from borrowings from Latvia’s Latvijas Krajbanka, which is also controlled by Antonov.

Meanwhile, airBaltic would like to increase its capital and no doubt needs to – it does not yet make profits and the big route expansion and fleet renewal are all very expensive.

Indeed, Antonov made his interest in the airline very clear in an interview to the mainstream Latvian newspaper Dienas Bizness, over the summer:  “I know who wants to buy airBaltic and who wants to invest money into the airline, one way or another. I know these people very well.”

Meanwhile, yesterday’s filings for bankruptcy protection – apparently a surprise to the Latvian government – seems to be another means by which Antonov is extending airBaltic’s soft loans by giving it a longer payments holiday on the money he has lent from his own bank.

What happens next is a very political game:

There are some other scenarios – was airBaltic ever to fail, the other big players in the Baltic region – Ryanair, Wizz Air and Flybe Nordic – would quickly rush to fill the gap left in Latvian-intra EU services. But these non-Latvian airlines would not be able to take over the services between Riga and Russia, the Ukraine, etc. that airBaltic is so specialist in. The Russians would probably be particularly politically unsympathetic to assist where a Russian investor had been thwarted.

This sort of dispute is best resolved before it becomes too public and one side is forced to back down. So, going back to our original question, should you worry if you are an airBaltic airport? Probably not – like a lot of national airlines, airBaltic is just too important for its government to let it fail – especially when there are those, like Mr Antonov, who are willing and rich enough to keep it fluid. Mr Antonov said as much in the summer: “All I can say is: Rest assured, you may safely buy tickets and fly airBaltic. I know for certain that the operations of airBaltic will not come to a halt.”