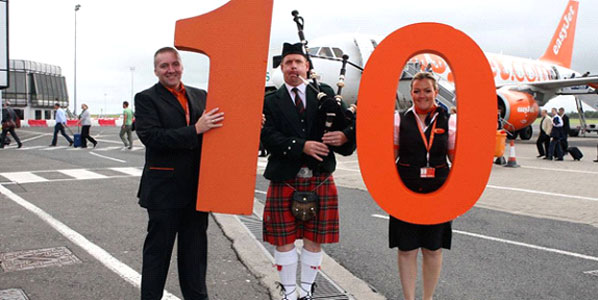 Domestic routes make up 60% of easyJet’s flights at Edinburgh. From the Scottish capital, ‘Big Orange’ operates high-frequency routes to three London airports, Bristol and Belfast International, of which the latter route celebrates its 10th anniversary this month.

Edinburgh, the UK’s second busiest airport outside of London (after Manchester), has become a significant base for both easyJet and Ryanair. easyJet’s involvement dates right back to September 1995 when it began flights from London Luton, just a few days after its first ever flights from Luton to Glasgow. This week, the airline based its fifth aircraft at the Scottish airport (four A319s and one A320) and began new routes to Athens (three weekly flights) and Tenerife Sur (two weekly flights), bringing the number of destinations served this summer to 22.

A seasonal Grenoble service begins in mid-December, while the airline this week also announced plans to add scheduled services to Dalaman (Turkey) and Naples (Italy) starting in April 2012. Since last summer, easyJet has also added new routes from Edinburgh to Basel (December 2010), Cologne/Bonn (November 2010), and Paphos (also November 2010). At present, services to Alicante, Lisbon, Nice and Palma only operate during the summer season. 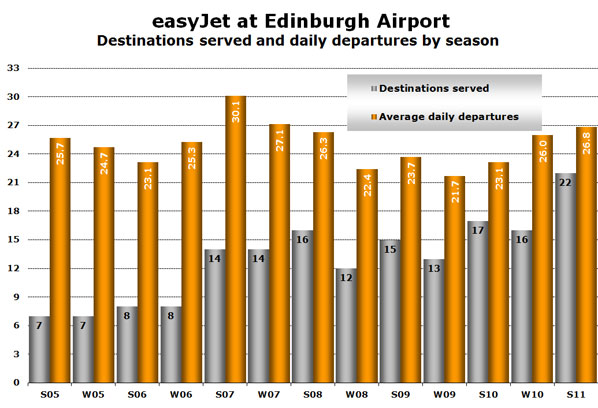 Source: OAG Max Online for February and August/September for each year.

While the number of flights from Edinburgh Airport has remained relatively stable, the number of destinations has increased significantly from just seven in the summer of 2005 (six domestic routes and Amsterdam) to 22 this summer (five domestic routes but now 17 international destinations). This has been achieved by cutting back frequencies on the domestic routes (such as London Luton, which has been cut back from six daily flights to just three) and adding new international routes at relatively low frequencies.

The three routes to London airports plus Bristol and Belfast International generate 119 weekly departures out of a total of 195 across all routes. Domestic routes thus account for 60% of all easyJet’s flights at Edinburgh, but less than 25% of all destinations.

Six international destinations are served at least daily with Amsterdam, Munich and Geneva leading the way. In terms of direct competition, easyJet competes with Ryanair on Alicante, Krakow, Palma and Tenerife Sur, with Air France to Paris CDG, with British Airways to London Gatwick, with germanwings to Cologne/Bonn, with Jet2.com to Palma, and with KLM to Amsterdam. easyJet also competes indirectly with Flybe on the Belfast route.

Popular easyJet destinations not currently served by the airline from Edinburgh include Faro and Malaga, both of which are served by Jet2.com and Ryanair.

Only three routes dropped in 16 years

easyJet has dropped relatively few routes from Edinburgh over the years; East Midlands and Dortmund services were dropped in summer 2005 and summer 2008 respectively, while flights to Gdansk only operated from the end of October 2007 to 22 April 2008.