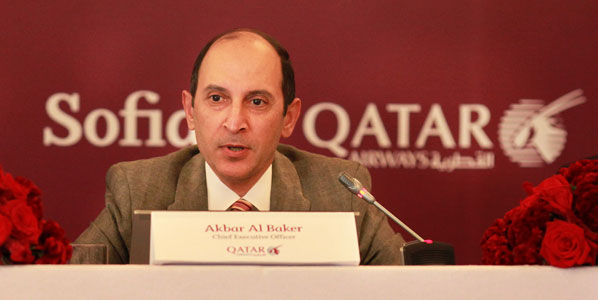 Sofia, the capital of Bulgaria, is Qatar Airways’ latest new destination. The airline is now serving nearly as many destinations as its main rival Emirates, although the UAE airline has announced seven further destinations to be added in the coming months, compared with Qatar Airways’ five.

Since anna.aero last looked at the “Middle East Big 3” (MEB3) airlines of Emirates, Etihad and Qatar Airways back in October 2010, there have been 15 new non-stop route launches, of which Qatar Airways has been responsible for 10.

Of these, Aleppo, Basra, Bucharest, Budapest, Montreal, Shiraz and Stuttgart are new destinations for the MEB3 carriers taken as a whole. Both Emirates and Qatar Airways have (for the moment) dropped flights to Tripoli in Libya, while Qatar Airways also gave up its London Gatwick route in favour of an additional daily flight to Manchester.

Since our last analysis almost a year ago, Emirates has increased its non-stop flights from its home base by a modest 4.0%, Etihad by 6.5% and Qatar Airways by a massive 17.7%.