Earlier this year, WestJet launched a new route from St. John’s to Orlando in Florida. While the US is the biggest international country market from the Atlantic Canada airports, both St. John’s and Halifax also offer European services.

The Atlantic Canada Airports Association has 14 airport members, of which 12 currently support scheduled air traffic services (according to OAG data for September). Of these, the busiest by far is Halifax Stanfield International Airport (YHZ) in Nova Scotia that handled 3.51 million passengers in 2010, making it Canada’s seventh busiest airport after it overtook Winnipeg in 2008. St. John’s International Airport with 1.32 million passengers last year is the second biggest of the member airports. A further 10 airports offer scheduled services at present, including three that offer international flights. 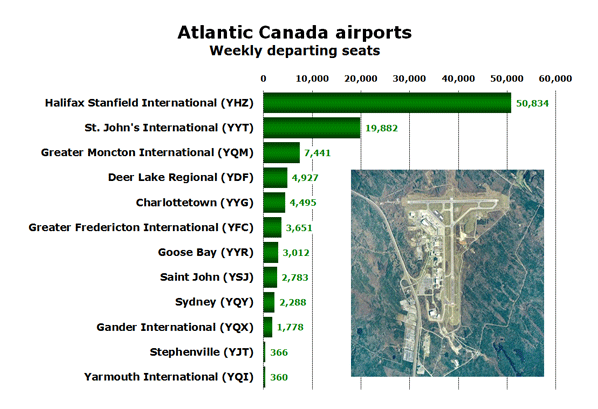 Canadian carriers have 90% of capacity

Analysis of schedule data for the Atlantic Canada airports reveals that Air Canada accounts for around 60% of all scheduled seat capacity, with WestJet having just under 20%. 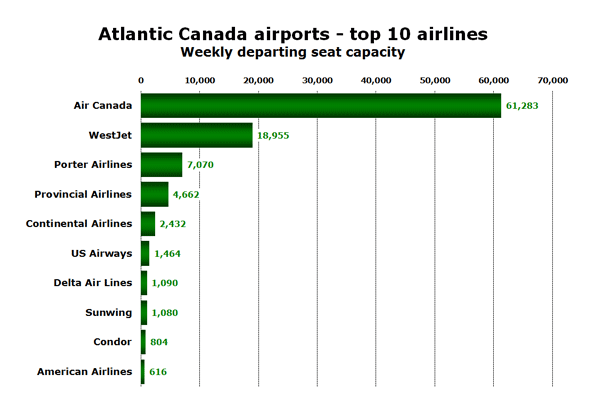 Provincial Airlines is a regional airline based at St. John’s, which operates a variety of small turboprop aircraft on a range of domestic routes in the region. The biggest non-Canadian airline is Continental, which offers flights to its hub at Newark from Halifax, St. John’s and Greater Moncton International Airport.

A total of 17 airlines currently offer scheduled services across these 14 airports including several US carriers, Cubana and Icelandair. The leading international market is, unsurprisingly, the US with over 100 weekly departures from seven airlines, primarily from Halifax. However, one interesting service is provided by Twin Cities Air Services which operates regular flights from Yarmouth in Nova Scotia to Portland, Maine.

The UK (London Heathrow) is served daily non-stop from both Halifax and St. John’s by Air Canada, and there is also a weekly London Gatwick service to Halifax operated by Thomas Cook. Direct flights to and from Germany are currently only provided by Condor from Frankfurt to Halifax. 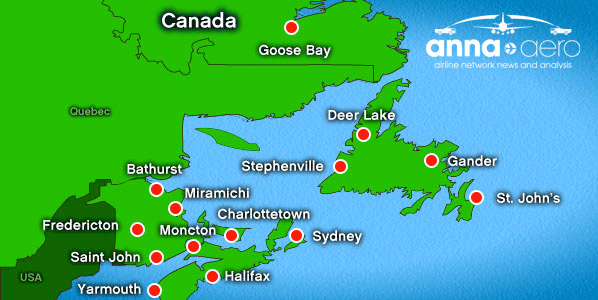 A total of 14 airports in Nova Scotia, New Brunswick, and Newfoundland and Labrador make up the Atlantic Canada Airports Association, with Halifax and St. John's both handling more than one million passengers annually.

Altitudes East in Halifax next week

Next week, Halifax Airport is hosting Altitudes East where the theme will be “Connectivity: Your co-pilot to success”. The event includes presentations from Halifax Stanfield International Airport and Air Canada, which anna.aero’s Editor Ralph Anker will be attending.