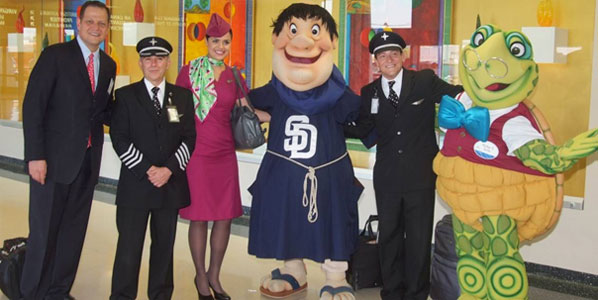 The most recent international destination to receive Volaris services from the airline’s new biggest base at Mexico City is San Diego. More than a quarter of the low-cost airline’s routes are now to the US.

The collapse of Mexicana last year opened the door to other carriers at Mexico City Airport. One of the airlines to take advantage of this was low-cost carrier Volaris, which had previously used Toluca to serve the Mexico City catchment area. With the launch last week of services to Zacatecas, Volaris now serves 15 destinations from the country’s capital airport, having only started flights there last September.

In July, the airline carried more than 400,000 domestic passengers in a month for the first time (423,000 up 24% on July 2010) and so far this year domestic passenger numbers are up 32%. Last year Volaris carried 3.6 million passengers on domestic routes and should exceed 4.5 million this year. The airline’s fleet comprises 24 A319s and seven A320s. The airline received a new A320 at the end of July and according to Airbus has a further 17 A320s on order which have yet to be delivered. 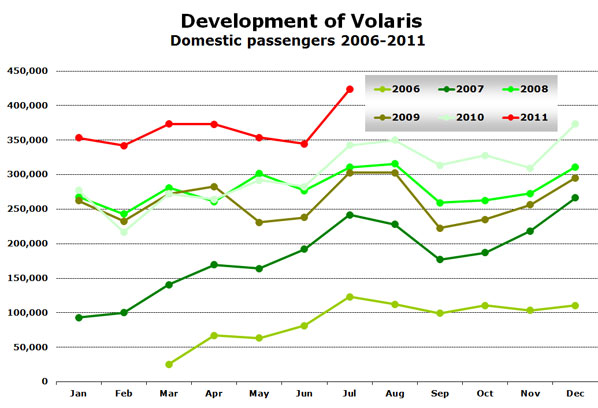 Volaris’ share of the domestic market peaked in February at 20%, but has now stabilised at between 16% and 17% of the market.

Serving seven airports in the US

So far this year (January to July), Volaris has also carried almost 550,000 passengers on international services, compared to around 1.9 million for Aeromexico. Of the airline’s current network of 53 routes, 14 are international routes to the US. Volaris currently serves seven airports in the US; Fresno, Chicago Midway, Las Vegas, Los Angeles, Oakland, San Diego and San Jose. Of the 14 US routes, seven are from Guadalajara, four from Mexico City and one each from Aguascalientis, Morelia and Zacatecas (all to Los Angeles). From mid-November, the airline is adding three further US routes, all to Chicago Midway from Mexico City, Morelia and Zacatecas.

Mexico City has now established itself (just) as the airline’s busiest airport with just over 200 weekly departures. The airline now has a share of around 6% of aircraft movements at Mexico City. During the last year, there has also been considerable expansion at Guadalajara, while Toluca has seen a significant decline. 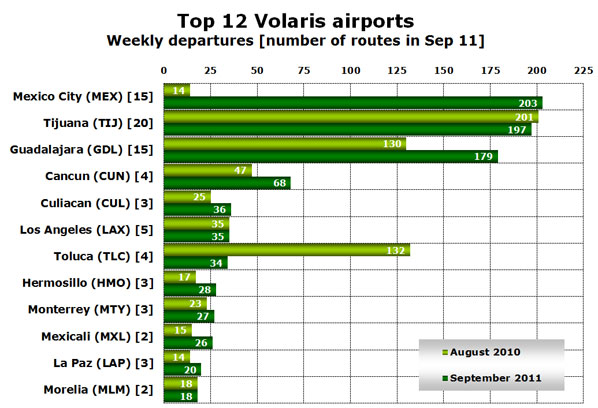 Volaris now operates over 1,000 weekly departures across a network of 31 airports, 24 in Mexico and seven in the US.
Tweet