Prague Airport in the Czech Republic remains the busiest airport in Central Europe, handling over 11.5 million passengers last year, although this is down from the airport’s all-time peak of just over 12.5 million reached in 2008. In the space of just five years, passenger numbers at the airport doubled from 4.8 million in 1999 to 9.7 million in 2004. Even though the Czech Republic only joined the European Union in May 2004, it had embraced a more liberal approach to air travel several years earlier enabling low-cost services to start as long ago as 1999.﻿ 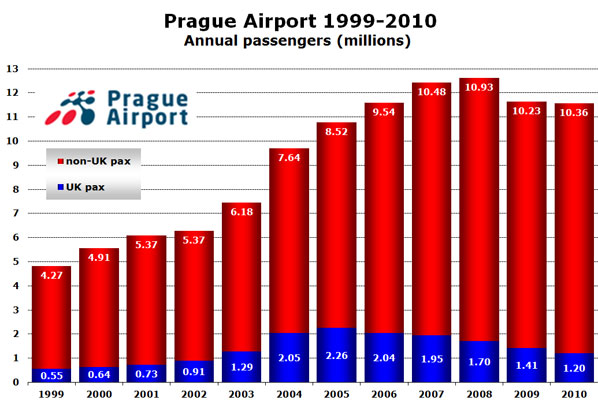 The UK market in particular (helped by low-cost services) saw phenomenal growth, quadrupling in size between 1999 and 2004. However, since 2005, the UK market has been in steady decline, shrinking by over 45%. Fortunately, other markets have been more robust and non-UK traffic has grown by 22% during the same period. 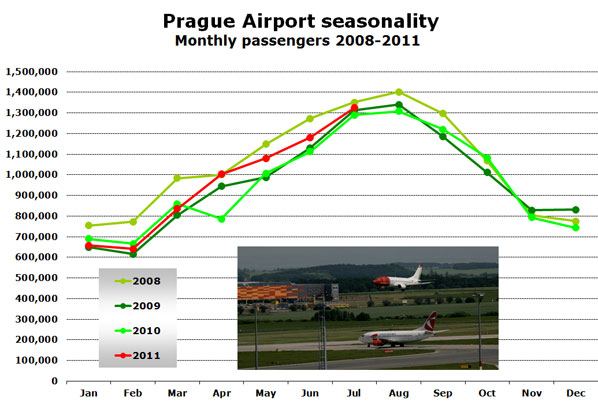 Passenger numbers in the first seven months of 2011 are up almost 5%, and after a difficult winter, the summer months have seen consistent year-on-year growth. Traffic typically peaks in August when demand is almost twice has high as during the off-peak months of January and February.

Local carriers have 50% of the Prague market

According to OAG data, Prague is currently served by 46 scheduled airlines with Czech Airlines the biggest airline, operating over 500 weekly departures to over 50 destinations non-stop, although it notably pulled out of the UK market last winter.

Local LCC SmartWings, which has been operating since May 2004, offers an extensive range of primarily leisure destinations, at mostly less than daily frequency. Wizz Air opened a Prague base in February 2009 and now serves 12 destinations from the airport, although at one time or other it has operated to 17 destinations. It followed in the footsteps of Bratislava-based SkyEurope, which had operated a base in Prague before its collapse in August 2009.

easyJet currently links to Prague from seven airports across Europe; three in the UK, two in France plus Amsterdam and Milan Malpensa. Ryanair entered the Prague market in November 2007 with flights to Dublin, followed in October 2008 by Birmingham, East Midlands, Frankfurt (Hahn) and Stockholm (Skavsta). However, all Ryanair services were terminated last summer, supposedly because of a disagreement over airport charges.

Long-haul services at the airport are provided by Delta (to Atlanta during the summer and to New York JFK year-round), while Korean Air (another SkyTeam carrier) serves Seoul Incheon with four weekly flights. Emirates is currently the only one of the major Middle East carriers to serve Prague, a route it started in July 2010.

During the last 12 months, the airport has celebrated the launch of many new routes. Czech Airlines has added Bordeaux (France), Donetsk (Ukraine), Lviv (Ukraine), Poprad/Tatry (Slovakia) and this week has begun flying four-times weekly to Abu Dhabi in a codeshare partnership with Etihad.

Italian AirOne (part of the Alitalia group) introduced Milan Malpensa flights (replacing the soon-to-no-longer-exist Lufthansa Italia) earlier this week, and also started Pisa flights on 13 September. In the coming weeks, Air France will begin flights from its new ‘base’ in Marseille, while SmartWings is planning to introduce flights to Tel Aviv at the start of the winter season.

By far the busiest single route is to Paris CDG Airport, which welcomed almost 740,000 passengers in 2010, up 34% from 2009. SkyTeam members Air France and Czech Airlines both serve the market but local LCC SmartWings significantly increased frequency on the route in 2010, while in March 2010 easyJet launched daily flights on the route. 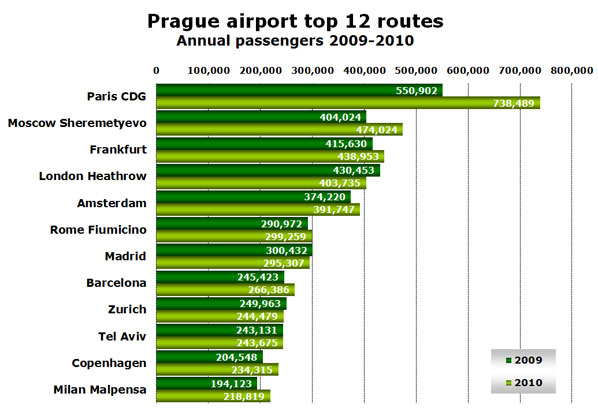 Nine of the top 12 routes reported growth in 2010 with Copenhagen, Milan Malpensa and Moscow Sheremetyevo all joining Paris CDG in reporting double-digit growth. Traffic fell on routes to London Heathrow, Madrid and Zurich.