With the newly secured financing, airBaltic remains the largest airline in the Baltic countries. Ranking behind are Ryanair, which serves all of the four largest airports in the region, and Estonian Air, which has a more clear status as a national carrier.

With a combined population of around seven million people, and covering an area roughly one-third the size of Spain, the three Baltic countries of Estonia, Latvia and Lithuania (all of which joined the European Union in May 2004) are playing an increasingly important role in the development of air travel services in northern Europe. Last year, the four leading airports in the region (Riga in Latvia, Tallinn in Estonia, and Vilnius and Kaunas in Lithuania) handled just over 8.2 million passengers. Since 2007, Riga has been the big success story, seeing passenger numbers surge by almost 50% as home carrier airBaltic developed its hub-and-spoke network. In contrast, both Tallinn and Vilnius have seen passenger numbers drop by 20%. However, Lithuania’s second airport in Kaunas has seen traffic more than double to over 800,000 annual passengers thanks to Ryanair establishing a base at the airport. 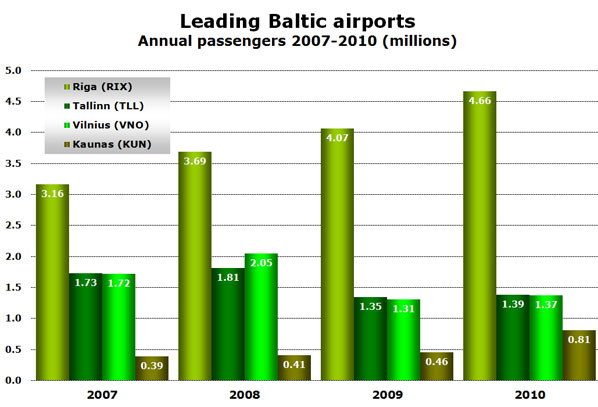 Despite the recent ownership and management issues, airBaltic remains by some distance the leading airline in the region, with more than three times as many flights as the next biggest airline, and nearly 70% more seat capacity than Ryanair, which has rapidly established itself as the region’s second-biggest airline with a base in Kaunas and a significant presence in Riga, Tallinn and Vilnius. 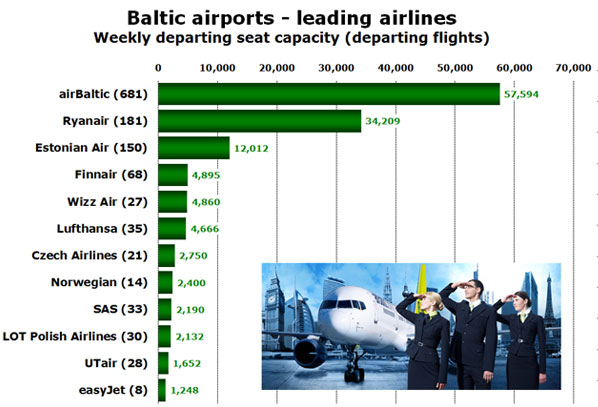 Fellow low-cost carrier Wizz Air opened a base in Vilnius in April of this year and currently operates eight routes from the Lithuanian capital, all to destinations in Western Europe. It also operates two flights at Riga Airport to London Luton and to Oslo Torp.

Estonian Air under attack from LCCs

A recent analysis by anna.aero of Estonian Air showed how the airline’s network had developed and what competition it was increasingly facing (although mostly indirectly) from easyJet, Norwegian and Ryanair. Unlike airBaltic, Estonian Air’s ownership seems fairly clear with the government now owning 90% and SAS just 10%.

Why no Lithuanian flag-carrier?

Despite being the largest and most populous of the three Baltic countries, Lithuania no longer has an airline operating scheduled passenger services to call its own. Lithuanian Airlines was founded in 1991 after the country’s independence from the Soviet Union. The airline evolved into flyLAL in 2005, but struggled financially and ceased operating in early 2009. This resulted in a major drop off in airport traffic in Vilnius in 2009, which was not rescued by the short-lived, single-aircraft LCC Star1. As a result, the leading airlines in Vilnius (measured by weekly seat capacity) are now airBaltic (two routes), Ryanair (six routes) and Wizz Air (eight routes).