The Finnish market is currently expanding the fastest in Europe. This summer season, Helsinki Airport has seen the launch of Norwegian’s base, the arrival of Finnair’s oneworld partner American Airlines from Chicago O’Hare and Finnair’s new non-stop service to Singapore.

Analysis of demand trends across 11 major European countries (plus Morocco) reveals all of them have reported lower growth in August than they did in July, suggesting that Europe’s airports may have a difficult second half of 2011, especially given the on-going economic crisis and the high-profile downscaling of capacity this winter for at least two of Europe’s biggest carriers (airberlin and Ryanair). 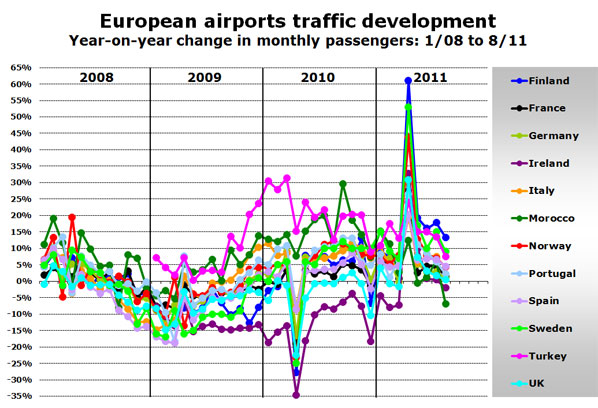 The big spike in April is the result of comparison with last April’s figures which were severely impacted by the Icelandic ash cloud saga. In August, only Finnish airports reported double-digit growth thanks in part to the development of Norwegian’s Helsinki base that opened at the end of March.

Even Turkey’s fast-growing market appears to be pausing for breath. Passenger growth at the country’s airports of 7.5% in August is actually the slowest monthly growth since August 2009, while Morocco (a country that has an ‘open-skies’ agreement with Europe) saw a 7% drop in passenger numbers in August, exceeding the 2% decline reported at Irish airports.

Germany introduced a passenger departure tax at the start of the year and the effect seems to finally being felt. Whereas in January and February, German airport traffic was up 7%, this fell to 5% in May, 3% in June and July, and less than 1% in August. Regional airports and those heavily dependent on low-cost airline traffic are being hit hardest. In August, the Ryanair bases of Hahn and Weeze reported traffic drops of 21% and 26.3% respectively, while Bremen (where Ryanair also has base) was down 10.2%.