Still need photos from from the anna.aero Routes Berlin Dailies?

We’ve had a lot of requests from airline and airport friends to supply images of the social events, exhibition and conferences which have appeared in our onsite printed newspaper – the anna.aero Berlin Daily – which we produced each day at Routes in Berlin this week. We’re very happy to supply these pictures (especially as all this work is performed by another department down the hall). All we ask for is an “anna.aero” photo acknowledgement so we can get all the credit. 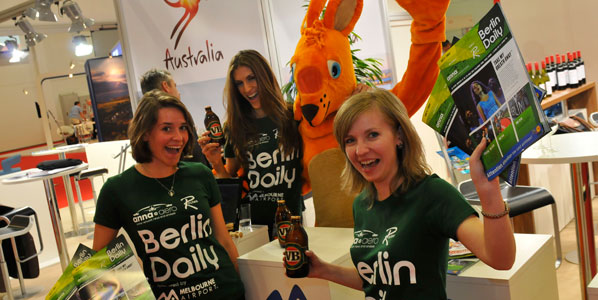 Distribution of the anna.aero Routes Berlin Dailies was sponsored by Melbourne Airport which also laid on this helpful kangaroo to make sure our beautiful vendors remained at the optimum operating temperature by administering refreshing VB beer.

Once again, we’d like to thank Dave Stroud and his Routes team for selecting anna.aero as Media Partner and daily newspaper producer for the third year in a row and to congratulate Routes and UBM Aviation for staging such a fine show.

“Goodbye to Berlin” (in case you are not as old as the anna.aero editorial staff, combined age 456 years) was the novel by Christopher Isherwood about 1930s Berlin nightclub life which later became the Broadway musical Cabaret! followed by the 1972 film starring Liza Minnelli.

Meanwhile, just in case you didn’t make it to Berlin or, just in case you went, but need reminding what you did there – here are the PDFs of the anna.aero Berlin Dailies below, all 240 pages of them, preserved…forever… 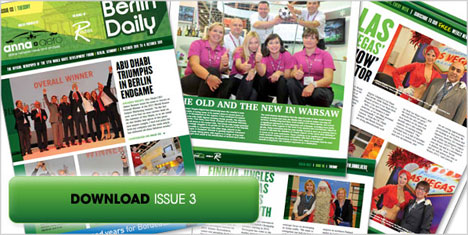 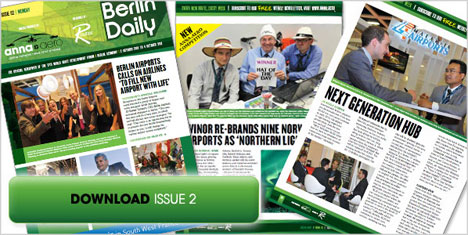 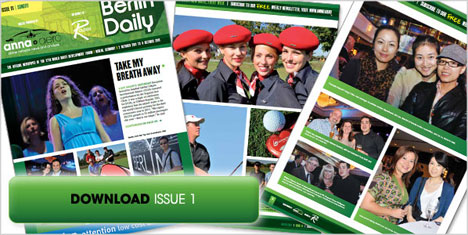