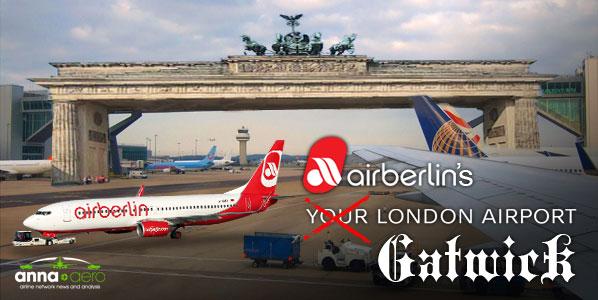 We like this picture, even though it’s not relevant to this story – airberlin had a short affair with London Gatwick earlier this year, operating to Hannover and Nuremberg, but not Berlin. In fact no German airlines operate Berlin-London services, despite the 150% rise in traffic in a decade.

Since 1999, air traffic between the capitals of the UK and Germany has grown by over 150% from around half a million passengers per annum to almost 1.3 million in 2010. The trigger for this can be traced to a couple of unlikely suspects. Back in the winter of 1999, when the only flights between London and Berlin were from Heathrow to Tegel, KLM’s UK low-cost subsidiary buzz and Brussels-based Virgin Express both began multiple daily services from London Stansted; buzz to Tegel and Virgin Express to Schönefeld. A year later, Virgin Express moved its flights to London Gatwick before pulling off the route. 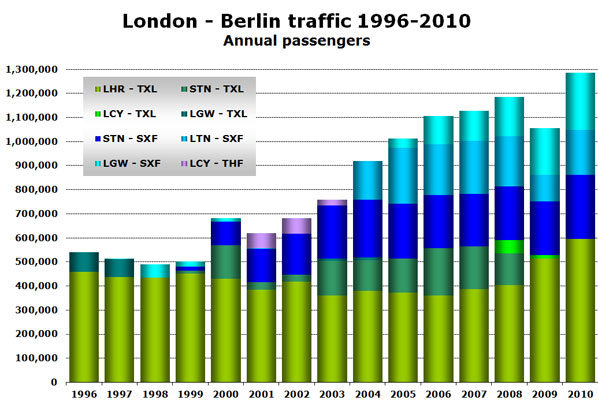 Buzz would then move its Stansted flights to Berlin Schönefeld. When buzz failed in early 2003 and was taken over by Ryanair, the Irish carrier rapidly re-launched the route from 1 May 2003. Meanwhile airberlin (or Air Berlin as it was then) had begun serving London Stansted from Berlin Tegel in September 2002. dba made a brief appearance in the market linking London Gatwick and Berlin Tegel with two daily flights during the winter of 2003. Finally in 2004 easyJet entered the market when it made Berlin Schönefeld a base and began serving Luton from 1 May and Gatwick from 26 September 2005.

In 2008, Lufthansa began Tegel to London City services but these were abandoned at the start of the summer 2009 season in favour of the airline’s first ever flights from Berlin to London Heathrow. In October 2008, airberlin also gave up its Tegel to Stansted service. Finally, at the start of the summer 2010 season Lufthansa handed over its Berlin Tegel to London Heathrow service to fellow Star Alliance member bmi British Midland International. As a result there are now only four airport-pairs linking the UK and German capitals.

Traffic data for this July shows that the market is still growing, suggesting that the 1.3 million mark should be broken in 2011.

It must be somewhat puzzling to Germans that all services between their capital and London are now served by carriers based outside of Germany (even if bmi is owned by Lufthansa). British Airways and bmi compete on Heathrow to Tegel leaving easyJet and Ryanair to serve Berlin Schönefeld from the other London airports.

Whether the shift of all Berlin flights next June to Berlin Brandenburg International Willy Brandt will make any difference remains to be seen. Maybe once airberlin officially joins the oneworld alliance some time in early 2012 it will take over some of BA’s flights from London Heathrow giving German passengers once again an opportunity to visit London on one of their own airlines.