SpiceJet’s VP Commercial V Raja (left) and CCO Sam Sridharan (second left) were welcomed with a cake to Mangalore, after which the gentlemen held a press conference. 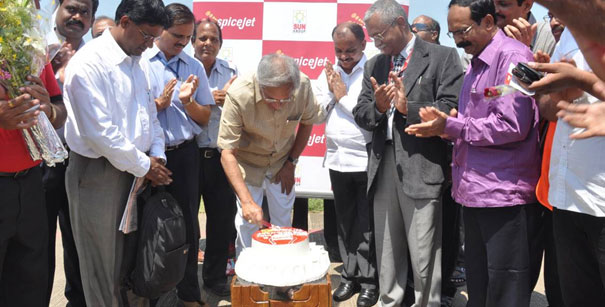 In Rajamundry, the same gentlemen were offered another round cake – this one of a somewhat smaller diameter, but higher. Yes, there was another cake in Vijayawada as well…and one in Bhopal too. In Indore, SpiceJet’s CCO Sam Sridharan held a press conference. He asks anna.aero: “Having travelled to six airports in the last seven days, launching at least a daily service to all these cities from Hyderabad on our new Q400 fleet, I am tempted to ask if this is a record of some sort for a six-year-old airline.” While we reckon it is (not to mention what a great way it is to get to eat lots of cake), please write to us if you know otherwise.