Although the primary reason for American Airlines’ growth on transatlantic flights in April was the volcanic ash disruptions last year, the airline also launched two new routes across the Atlantic that very month; New York JFK – Budapest and Chicago O’Hare – Helsinki. During the summer season, American’s transatlantic traffic has grown on last year.

It may come as a surprise to realise, but in 2010, American Airlines’ capacity (ASMs – available seat miles) and fleet size were remarkably similar to what they were back in 1995. Annual ASMs were just over 150,000 million, while the fleet was between 620 and 640 aircraft. However, what has changed dramatically in that period is the airline’s ability to fill the capacity offered as annual average load factor climbed from 66.3% in 1995 to a record 81.8% in 2010. Of course, in between these two years, the airline had acquired TWA and seen its fleet peak at almost 900 aircraft (in 2001). ASMs, on the other hand, peaked in 2005 at just over 176,000 million.

In recent months, the airline has been in the news because of concerns about its financial health, its plans to sell-off its regional subsidiary American Eagle, and also for its record-breaking aircraft order which, for the first time, includes acquiring European Airbus aircraft. In the past, the airline (along with Southwest and Ryanair) has been just about Boeing’s most loyal customer.

Examining the airline’s route network in more detail reveals some interesting surprises. The airline’s four biggest bases are at its home headquarters of Dallas/Fort Worth, followed in terms of flights by Chicago O’Hare, Miami and Los Angeles. These are also the airline’s four biggest airports in terms of weekly seats, but if capacity (ASKs – Available Seat Kilometres) is measured instead, New York’s JFK now ranks fourth thanks to its range of long-haul routes. 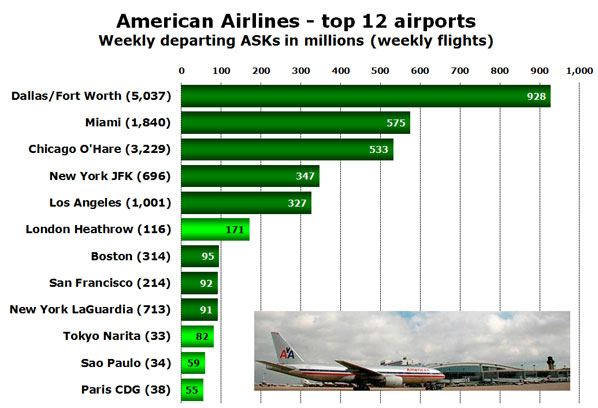 The top 12 airports for American measured in terms of ASKs includes four airports outside of the US; London Heathrow ranks sixth thanks to over 100 weekly transatlantic departures, with Tokyo Narita, Sao Paulo Guarulhos and Paris CDG also outperforming all but eight US airports.

So far this year (January to September), overall demand (RPM – Revenue Passenger Miles) has risen by a modest 1.5%, with only August (-0.4%) showing a small reduction. Domestic demand on American Airlines (as opposed to American Eagle Airlines) has been flat or down each month this year except September. 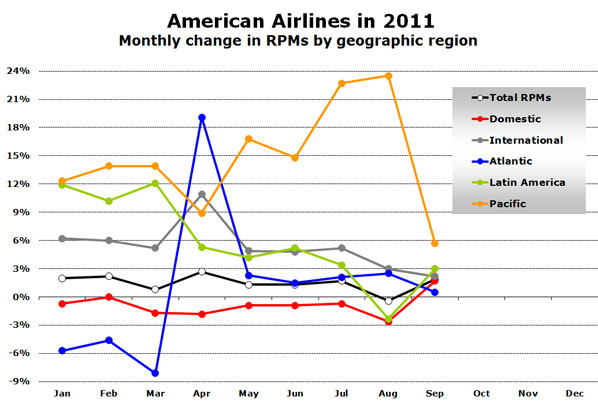 International RPMs are up 5.2% in the first nine months of 2011. The regional variations reflect the varying strengths of economies in different parts of the world; the Pacific market is up 15%, Latin America 5.8% and the Atlantic market a modest 1.4%. Transatlantic services had a disappointing start to the year, not helped by the bad weather in the UK that disrupted operations at London Heathrow. The April spike reflects the impact of last April’s volcanic ash saga. Although the Pacific market is the fastest-growing for American, it should be noted that these routes represent less than 14% of the airline’s international RPMs at present, compared with 38% for Atlantic routes and 48% for Latin American routes.

New international routes to China, Finland, Japan and Hungary in 2011

Notable new international services launched this year by American Airlines include daily flights from Los Angeles to Shanghai (April), Chicago to Helsinki (April), New York to Tokyo Haneda (February), and New York to Budapest (April). Back in April, American Eagle launched 10 new routes from Los Angeles to help feed international services such as the Shanghai route, while June saw four new routes introduced at the airport’s main Dallas/Fort Worth hub, two of which were to Mexico. According to OAG data for this week, American Airlines and American Eagle combined serve a total of 264 airports across the globe. 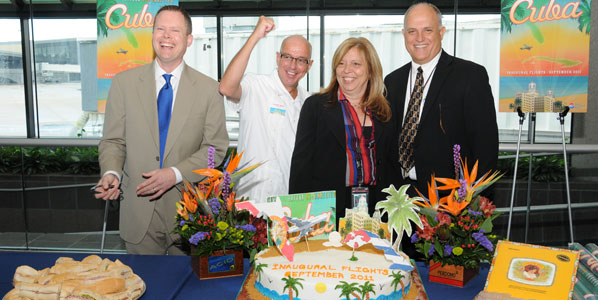 Although not part of American Airlines’ scheduled offering, the airline provides yet another charter route to Cuba as of last month. In cooperation with ABC Charters, Havana services are now also offered from Tampa.