Manchester persuades Ryanair to open base, and then recruits its Director of New Route Development! 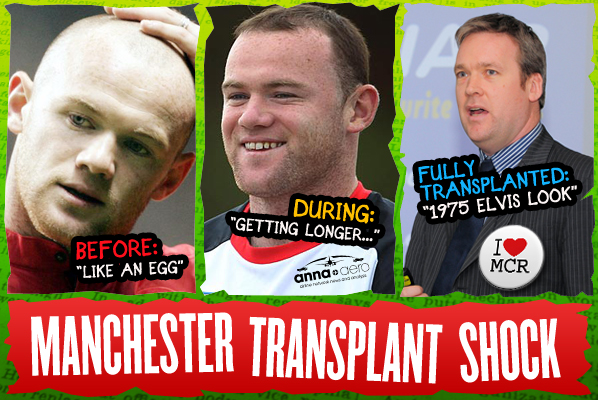 Manchester Airport has just succeeded in recruiting Ken O'Toole, Ryanair's Director of New Route Development as its new Chief Commercial Officer. anna.aero asked Michael Cawley, Ryanair COO and Deputy CEO what he made of this development: “We are very sorry to lose him, good Cork people are in great demand! (Cawley and O’Toole are both from the Southern Irish city) O’Toole has worked well as part of our commercial team to double the size of the airline in the last five years...I can categorically deny he was ever called Elvis.”

Manchester Airport is looking forward to some significant growth in the rest of 2011 and 2012 thanks to the imminent launch of a number of new routes. Many of the new services will be launched by Ryanair which is making the airport a base and expanding its current network of six routes (Dublin, Faro and four Spanish) by 12 destinations this winter and a further eight next summer. Even without this expansion Manchester Airport has had a good 2011 with passenger numbers up 7% in the first nine months of the year. After seeing annual passenger numbers virtually triple between 1986 and 2005 (from 7.5 million to 22 million), the airport had seen demand drop by 20% in just three years back to 17.7 million last year. 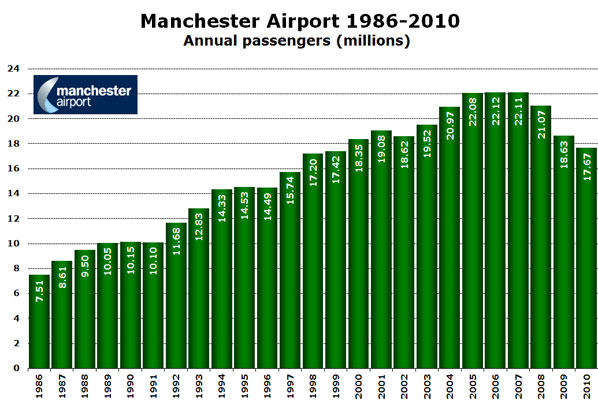 The opening of a second, close parallel runway in 2001 (after a lengthy public inquiry*) helped the airport pass the 20 million passenger mark and further cemented the airport’s position as the UK’s leading airport outside of London.

With a strong emphasis on leisure traffic, especially during the peak summer months, passenger throughput in August is double that of January and February. In 2011 year-on-year passenger numbers have been up every month except March. 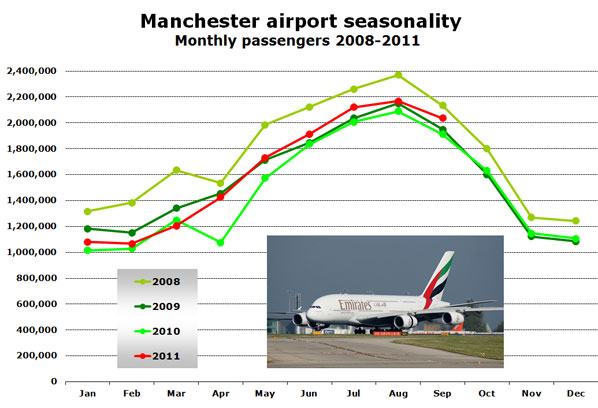 A previous analysis of the airport’s leading airlines this summer revealed how three of the top four airlines at the airport in August (in terms of weekly seat capacity) were Thomson Airways, Monarch and Thomas Cook Airlines. Flybe’s activities are on course to break this leisure monopoly with flights to 22 destinations (including 11 in the UK). UK LCCs easyJet and Jet2.com were ranked fifth and sixth, with Ryanair lurking in ninth place just behind British Airways (operating just three routes to London Gatwick, London Heathrow and Billund), followed by Lufthansa (five German routes).

All three ‘MEB3’ carriers are present at the airport, with Emirates (three daily flights) having selected the airport as the first ‘regional’ airport in the world to receive A380s on a regular basis. Etihad and Qatar Airways have both doubled their flights from daily to twice-daily during the last 12 months.

For many years, easyJet’s presence in the region was limited to its nearby base at Liverpool which it had opened as long ago as 1997. However, when easyJet acquired GB Airways in 2007/08, it decided to grow the airline’s relatively small presence in Manchester. Since then easyJet has developed its offering at Manchester from seven destinations in the summer of 2008 to over 20 this summer with Bilbao (17 June) and Berlin Schönefeld (3 October) being the two newest additions to the carrier’s network.

Although Ryanair’s new base is clearly the main generator of new routes this winter, it is not the only carrier that will be celebrating route launches to/from the UK’s current centre of footballing dominance. easyJet will launch double daily flights to Belfast International this winter and is also adding a link to its Madrid base. Coincidentally, Iberia is also launching flights between these two airports. Analysis of major European markets from Manchester reveals that the ‘madman’ market was handling over 100,000 non-stop passengers as far back as 1998 before the route was abandoned in 2008 by bmibaby. Ryanair then re-introduced service on the route in April of this year. This winter will therefore see three major carriers competing for business on the route which last winter was served by none of these carriers. So much for the ‘maturity’ of the UK air travel market! 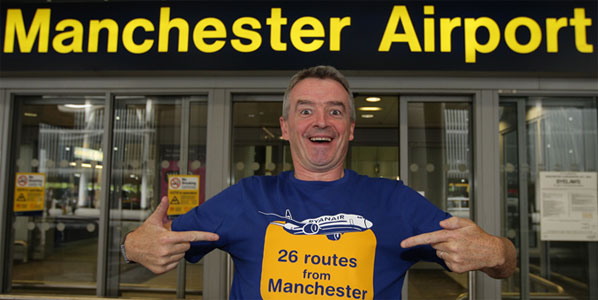 anna.aero asked Ken O' Toole if we could expect a really decent Cake of the Week for his first Manchester Airport route launch as the airports new Chief Commercial officer (see table below). Happily for us, Mr O'Toole confirms: "I’ll add a proper cake to the agenda going forward." Ryanair will lead the surge of new routes this winter, although many other competitors are contributing to Manchester’s return to good fortune.

Flybe is starting two new routes this winter; one domestic (Newquay) and one to Ireland (Knock) to further consolidate its position on short-haul routes. A relatively minor change sees Swiss taking over operations on the Basel route from Star Alliance partner bmi, which had taken over the route from Swiss at the start of the summer season.

Allegiant-like Jet2.com will offer just a handful of routes this winter but this summer fielded over 30 destinations. For next summer the airline has already announced plans to add ‘new’ routes to Barcelona, Istanbul, Paris CDG, Pula and Toulouse. In fact, only Istanbul and Pula are completely new routes as the other three destinations were all served by Jet2.com during the summer of 2007.

This winter also sees the return of Europe’s third biggest LCC, Norwegian, which launches three weekly flights (Monday, Wednesday, Friday) from Oslo, competing with SAS’ five weekly flights. Back in April 2006, Norwegian launched twice-weekly flights from Bergen to Manchester, but this service only operated for a year.

* anna.aero’s Editor was involved in this inquiry in a small supporting role. When employed at Cranfield University in the 1990s he helped analyse the airport’s traffic forecasts (and the models which were used to create them) which were presented as a major justification for the second runway.