After Russia, Sweden is that of the top 15 country markets to grow the fastest to and from Spain – +23%. A contributor is Norwegian, which launched a new Barcelona route from Gothenburg in August.

Despite concerns about the local economy, passenger numbers at Spain’s airports in the first nine months of this year are up by 7.3%. However, while domestic traffic thataccounts for around 37% of airport traffic is up less than 1%, international traffic is up almost 12%, helped by an increase in capacity as tour operators and airlines had to re-allocate much of their Tunisian and Egyptian capacity elsewhere, at least for part of the year. 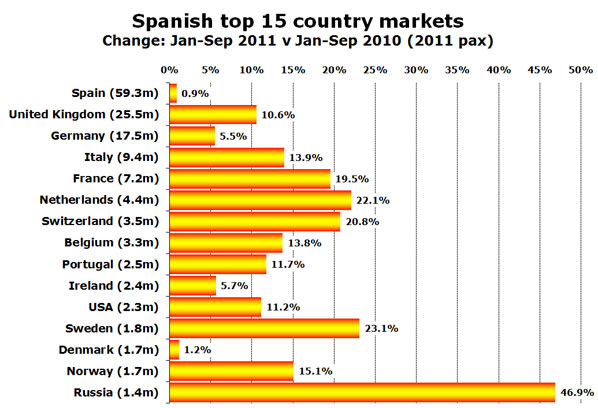 The two largest international country markets, the UK and Germany, have both grown by less than the international average. The UK’s sluggish economy has not helped encourage tourism (although the lousy summer weather did), while the aviation tax introduced in January has certainly depressed demand from Germany to some extent.

The star performer among the top 15 country markets was Russia, which has seen growth of almost 50% over 2010. Comparing OAG data in 2011 and 2010 for a week in September reveals which carriers have been growing fastest in this market.

Russian carriers dominate the market with Aeroflot and Transaero each having around 25% of the scheduled market. Vueling has now overtaken Iberia to rank third, serving both Moscow Domodedovo and St Petersburg from Barcelona. Ural Airlines, one of this week’s profiled airlines, has seen the fastest growth, more than tripling its capacity in the market.

At the other end of the rankings come Tunisia and Egypt where passenger numbers have fallen by 74% and 62% respectively in the first nine months of the year. Another North African country, Morocco, saw demand fall by a relatively modest 3.3% (thus dropping out of the top 15 country rankings to be replaced by Russia), but nearby Algeria witnessed a surprising 18% increase in passenger traffic.