Sofia Airport in Bulgaria is one of several airports to have received new international services on board Russia’s fast-growing Ural Airlines. In October last year, the airline began operating from its Ekaterinburg hub.

Ural Airlines ranks as Russia’s sixth-largest airline by scheduled seat capacity. At its home airport, Ekaterinburg Koltsovo Airport (SVX), the airline dominates with a 40% share of seats, but the seat capacity offered by the airline out of its second-largest airport, Moscow Domodedovo (DME), is only 14% lower. 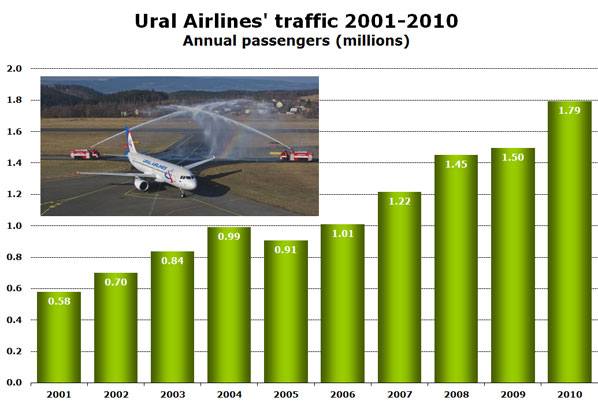 In the last decade, only once has Ural Airlines’ annual passenger numbers fallen; between 2004 and 2005. With that exception, growth has been consistent and the airline is now three times the size it was ten years ago. 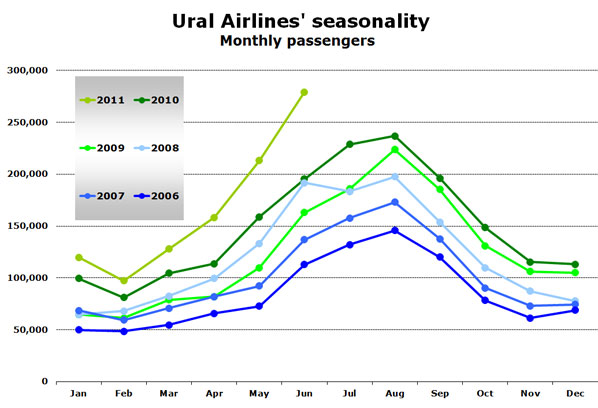 The airline’s rapid expansion continues in 2011 as well. For this year’s first six months, passenger numbers are up by 32%.

Ural Airlines’ traffic is highly seasonal, with a peak to off-peak ratio of around 3 over the last few years. August is the airline’s busiest month, followed closely by July. The seasonality pattern has been very similar over the years, clearly showing the growth in passenger numbers by year. However, in the first half of 2009, passenger numbers were down, only to be compensated by growth in the second half of the year.

Last week, the airline launched four new international routes, all notably from other airports than its main hub at Koltsovo. The airline’s international growth strategy appears to focus on launching low-frequency services to select foreign destinations from a wide range of Russian airports. The airline has announced three further routes to Dubai this year as well as another route to Harbin. 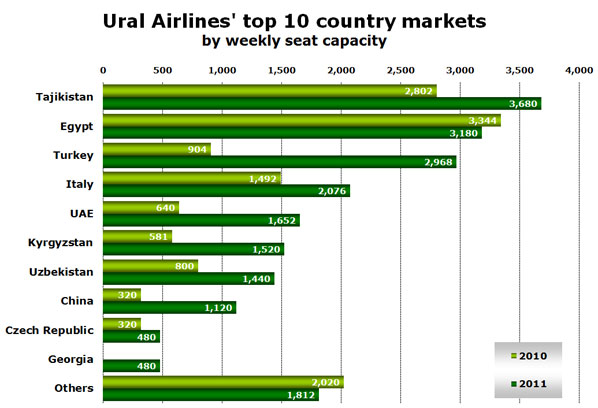 Among Ural Airlines’ largest international markets are three Central Asian CIS states; Tajikistan, Kyrgyzstan and Uzbekistan; however, the growth comes from elsewhere. The fastest-growing of the top 10 foreign markets are China (+250%) and Turkey (+228%), the latter now being the third-largest market. The only market to have shrunk since last October is another popular leisure destination for Russians – Egypt – although capacity is only down by 5%.

Georgia is an altogether new country market for Ural Airlines, which launched two routes to the country in August; between Moscow Domodedovo and Kutaisi as well as from Ekaterinburg to Tbilisi.

By next week, Ural Airlines will have phased out all of its Russian aircraft as its last Tu-154 aircraft operates this weekend. The airline will then operate an all-Airbus fleet of 13 A320s and 9 A321s (Source: CH-Aviation.ch). It also states that it plans to begin operating A330 aircraft next year and by 2015, Ural Airlines intends to have a total fleet of more than 30 aircraft.