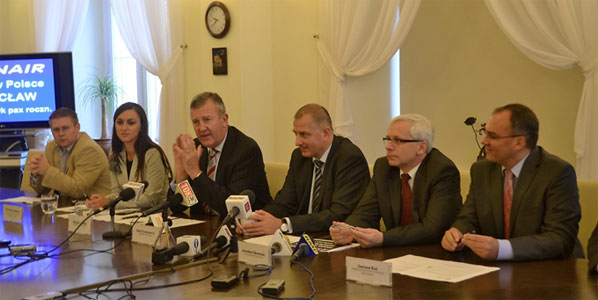 Ryanair this week finally announced its first base in Poland, the biggest and most populous of the countries which joined the EU in May 2004. Over the years Ryanair has repeatedly complained about the air navigation charges in the country as a reason for not committing to basing aircraft in the country, but despite that it has built up a portfolio of over 70 international routes making it the third biggest airline in the Polish market after national carrier LOT and Wizz Air.

Ryanair offers flights from nine airports in Poland, though the country’s biggest airport at Warsaw is notably not one of them. However, the airline is in active discussions with the operators of the new Modlin airport which will serve the Warsaw catchment area when it opens for business some time next summer. Krakow is by far the airline’s biggest base of operations with over 10 daily flights spread across 21 destinations. Wrocław, the airport chosen by Ryanair to be its first Polish base ranks second with 42 weekly departures to 14 destinations (a 15th route to Rome Ciampino re-launches at the end of the month). 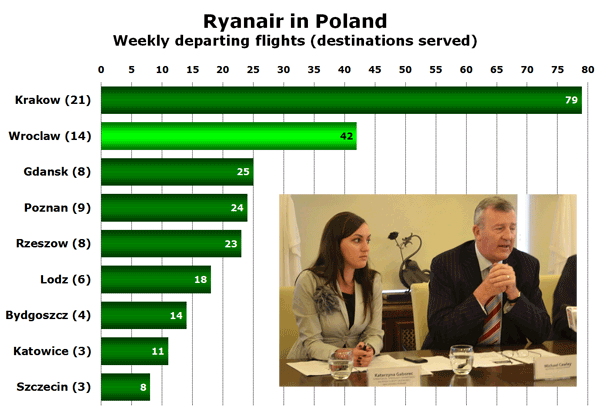 Wrocław airport is the fifth busiest in Poland and handled 1.65 million passengers last year, up 21% on 2009. A decade earlier the airport was handling just over 200,000 annual passengers. Ryanair started serving the airport from London Stansted in March 2005, followed by a further seven routes in 2006, two in 2007, five in 2008, two in 2009 and three in 2010. Ryanair’s current network of routes from Wrocław is summarised in the following table by country market.

Routes that have operated in the past are Bournemouth, Edinburgh, Frankfurt Hahn, Stockholm Skavsta, and Weeze (near Düsseldorf).

The airline has announced that as a result of basing a single 737-800 at Wrocław it will launch six new routes from the airport. These are Bournemouth (UK), Chania (Greece), Malmö (Sweden), Malta, Paris Beauvais (France) and Venice Treviso (Italy). All of these airports are already served by Ryanair from a variety of its other bases across Europe. 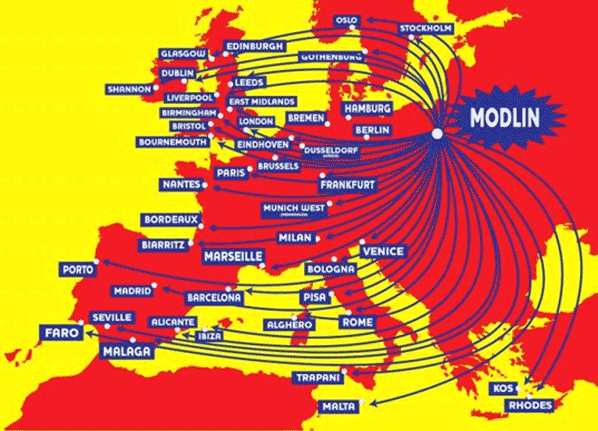 Cawley calls: Cawley also phoned and spoke to anna.aero this week to tell us about Ryanair's very significant plans for a base at the new airport of Modlin near Warsaw that opens in June 2012. “We'd really like to finish negotiations with Modlin before the end of November – all they have to do is say 'yes' and initially we'll launch a base of three or four aircraft and 10-12 routes, and 40 destinations eventually within five years.”