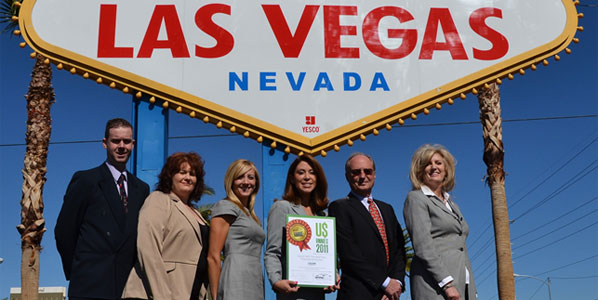 With a net gain of six international destinations Las Vegas is winner of the anna.aero US ANNIE of “Airport With the Most New Non-US Routes” – many US airlines are increasingly looking at international routes for traffic growth and profitability.

With demand for air travel within the US showing only modest growth in 2011 (up 2.1% in the first seven months of the year to 372.3 million according to latest US Bureau of Transportation Statistics data), it seems that many airlines are still looking increasingly at international routes for traffic growth and profitability. In the first seven months of 2011 US airlines carried 3.5% more international passengers. However, capacity (ASMs) has grown by 6.7%, outstripping demand (RPMs) which grew by 4.3%. As a result year-to-date load factors fell by 1.8 percentage points from 81.3% to 79.5%, while average sector length on international flights grew by 4.6% to 1,850 miles.

The top three country markets from the US are Canada, the United Kingdom and Mexico. Of the top 12 country markets only one (Germany) has seen a reduction in capacity compared with last October. This would appear to be further evidence of the effect of the government air travel tax introduced on departing flights from Germany at the beginning of 2011. The fastest-growing of the major international markets is Korea which has seen capacity grow by almost 21%, followed by China (+17%) and Mexico (+13%). The Mexican market has benefited from the US FAA’s decision last December to upgrade the safety rating of the country’s airports, thus allowing Mexican carriers to start new routes to the US this year. 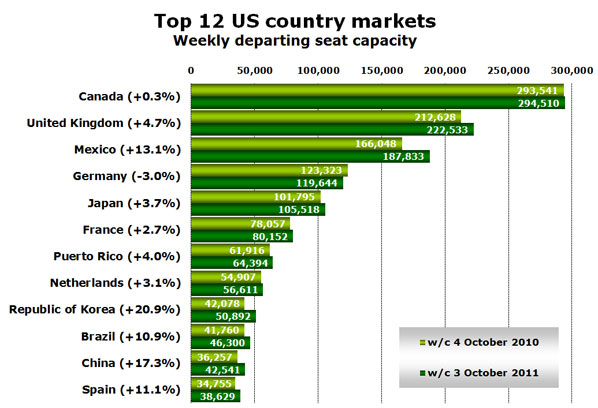 The ever more significant US-China market saw the introduction of new non-stop services in the last year between Detroit and Beijing (Delta from 1 July 2011), Honolulu and Shanghai (China Eastern from 9 August 2011), and Los Angeles and Shanghai (American Airlines from 5 April 2011, and United from 20 May 2011).

Despite overall seat capacity on international flights from the US being up 4.1% this October, the four biggest airlines serving this market (American, Continental, Delta and United) have all cut capacity compared with last October. All other airlines in the top 12 have increased capacity. 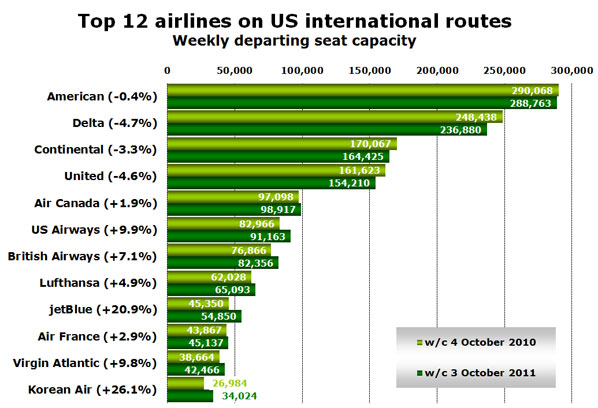 Among non-US carriers Air Canada maintains its lead over British Airways and Lufthansa. The fastest-growth among the leading carriers is reported by Korean Air (+26%) which helps explain the significant growth in the Korean market. The only other carrier among the top 12 reporting double-digit growth is jetBlue (+21%) which continues to expand its services to the Caribbean.