At Kensington Roof Gardens in London, AirAsia X celebrated the airport move with a gala event. After the prize draw, Gatwick Airport’s commercial director Guy Stephenson and Darren Wright, AirAsia X head of commercial, posed with the lucky winners who now get to fly to Kuala Lumpur in the airline’s lie-flat beds.

Next week, Kuala Lumpur based AirAsia X (the long-haul, low-cost partner of AirAsia) will celebrate its fourth birthday. This week, the carrier changed airports in London from Stansted (which it has been serving since March 2009) to Gatwick. Earlier this year, the airline added Paris Orly (from 14 February) and Christchurch in New Zealand (from 1 April). At the end of November, flights will start to Osaka Kansai, which thus becomes the airline’s second Japanese destination after Tokyo Haneda.

The airline’s current fleet comprises nine A330-300s (the most recent of which was delivered direct from Toulouse in November 2010) and two A340s, the latter being used on the airline’s European routes to London and Paris. According to Airbus, the airline has outstanding orders for a further 17 A330-300s, three A330-200s and 10 A350-900s.

Since launching London flights in March 2009 with five weekly operations (the most that could be achieved with one aircraft given the sector length), AirAsia X has grown the London – Kuala Lumpur market from 400,000 annual passengers to 600,000. 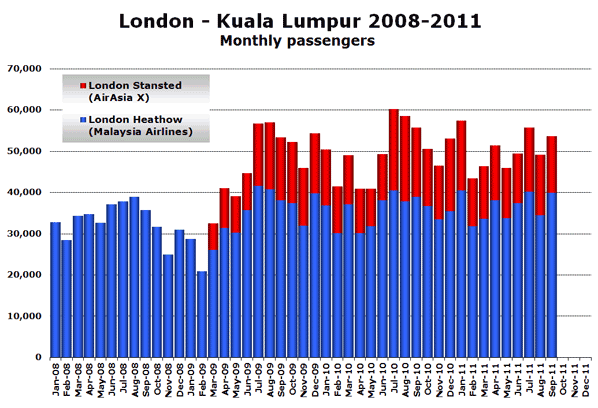 AirAsia X’s weekly frequencies peaked at nine in the summer of 2010, coinciding with when the airline’s passenger numbers on the route peaked at 20,772 in August.

AirAsia X head of commercial Darren Wright said: “Our aim has always been to open up travel for all. The popularity of the London-KL route is further testament to the pent-up demand for long-haul travel, provided the fares are low and the quality is high. That is the combination that we at AirAsia X are offering our guests. Gatwick Airport was chosen as it demonstrated the passion to work with us in realising our objectives to grow passenger traffic between our hubs in London and Asia Pacific. With our new home base in Gatwick, guests will be able to further benefit from the airport’s regional access and market connectivity potential with faster and cheaper rail connectivity to the city as compared to Stansted. AirAsia X sees strong potential for the airport as we believe our entry will address the fact that direct services to Asia have been significantly underserved from Gatwick.”

Guy Stephenson, Gatwick Airport’s commercial director said: “South-East Asia is an important destination for UK business and leisure travellers and so we are excited that AirAsia X has chosen to operate the popular London-KL route from Gatwick and enable us to meet growing passenger demand for travel to this region. Gatwick offers an attractive proposition to airlines and their customers. We are within an hours drive for around 15 million people and we have fast and excellent rail connections to central London. The combination of these factors mean that AirAsia X are in a better position to increase traffic between the UK and Malaysia now that they have moved their London ‘home’ from Stansted to Gatwick.”