China Southern on track for 80 million passengers in 2011; becomes seventh airline (and first from China) to fly A380 Fast-growing China Southern is now an operator of the world’s biggest commercial passenger aircraft, helping the airline grow even faster. At the A380 arrival ceremony earlier this month, China Southern’s chairman Si Xianmin and Airbus’ CEO Tom Enders led the celebrations. The aircraft is initially used on domestic services, which generate 90% of the airline’s passenger numbers.

In just seven years, SkyTeam member China Southern Airlines has gone from transporting just over 20 million passengers in 2003 to well over 75 million in 2010. This year, it is on target to carry around 80 million passengers and earlier this month, it became the seventh airline (and first from China) to operate the world’s biggest commercial passenger aircraft, the Airbus A380.

Domestic traffic still consistently accounts for just over 90% of the airline’s annual passenger traffic with flights to Hong Kong contributing a further 2%. International flights account for around 7% of passengers, but over 16% of the airline RPKs (Revenue Passenger Kilometres). 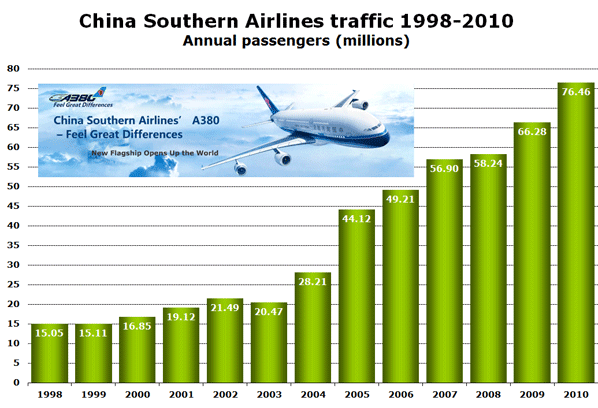 Traffic growth has been almost unbroken during the last five years except for during the summer of 2008 when China hosted the summer Olympics. During this period, the government tightened travel restrictions to help ensure that things ran smoothly during the period that the games were taking place. 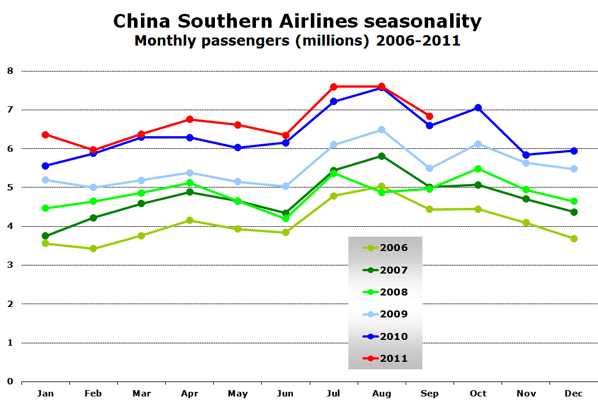 Since our last analysis of China Southern in April 2008, the airline has expanded its route network to 163 destinations worldwide, 109 of which are in Mainland China. Guangzhou and Beijing remain the two biggest bases of operation. 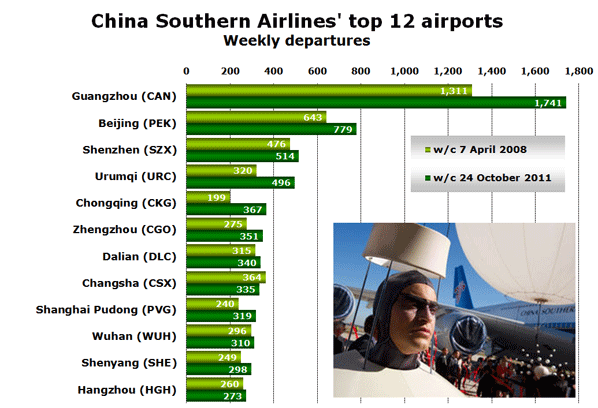 Overall, the number of flights at the airline’s top 12 airports has grown by 24% since April 2008. However, even among the biggest airports, there are some major variations in growth with Chongqing flights up 84%, and Ürümqi flights up 55%, while Wuhan and Hangzhou have grown by less than 5% and Changsha is down 8%. From the airline’s Guangzhou hub, China Southern has added intercontinental routes to destinations such as Vancouver and Amsterdam this summer. In Amsterdam, the airline notably connects with its alliance partner KLM.

Since 2008, Seoul has overtaken Hong Kong as the airline’s biggest airport outside Mainland China in terms of weekly seat capacity (and flights), with Taipei rapidly climbing into third place thanks to the growing number of non-stop connections now allowed between the mainland and Taiwan. By the end of this year, China Southern will have added at least nine new international routes to nine different countries from four Chinese airports.