After re-launching in 2009 as Airphil Express, Philippine Airlines’ low-cost subsidiary (previously known as Air Philippines and PAL Express) carried 1.9 million passengers in 2010, giving it a domestic market share of some 11%. Thanks to continued fleet expansion (the airline now operates a fleet of seven A320s and eight Q300s/Q400s), this has now grown to 19%. According to the airline’s booking tool and online timetable, it currently operates from 26 airports in the Philippines, as well as Hong Kong and Singapore.

Its network comprises a total of 40 routes of which 38 are domestic, plus international routes between Manila and Singapore, and Cebu and Hong Kong. The airline’s two newest routes from Manila to Cotabato and General Santos, both operating daily with A320s, began this week.

Of the airline’s top 10 routes in terms of weekly seat capacity, nine are from Manila while the tenth is between Cebu and Davao. Cebu Pacific competes on all 10 of these routes, while Philippine Airlines offers service on eight of them and Zest Air on seven of them. According to OAG data for the first week in December, Airphil Express accounts for 16% of all flights at Manila airport, beaten only by Cebu Pacific (34%) and Philippine Airlines (23%), and ahead of Zest Air with 11%. 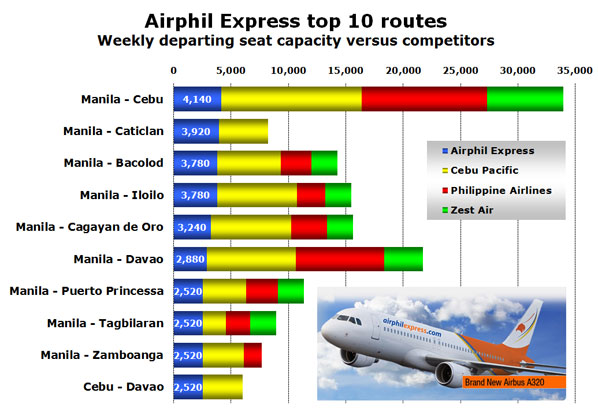 With Manila Airport busy during the peak periods, the airline has had to resort to some creative scheduling to grow its capacity at the airport. According to the airline’s flight schedule, three of the airline’s seven A320s depart Manila airport before 05:00 every morning. There is a daily flight to Davao at 04:15, a daily flight to Bacolod at 04:20 and a daily flight to Iloilo at 04:45. The new daily flight to General Santos departs Manila at 05:15. Few flights return to Manila after midnight but the daily Singapore service (which launched almost exactly one year ago) is scheduled to land back in the Philippines at quarter past midnight.