German Chancellor Angela Merkel’s government A319 was the first aircraft to land on the new 2.8km ‘Runway Northwest’ on a foggy Friday. She was greeted by Dr Stefan Schulte, executive board chairman of Fraport. Merkel described FRA as “a key engine of growth” that is “of crucial importance for Germany as an export nation” to the audience of 400 people.

Last week’s opening of a fourth runway at Frankfurt Airport marked a significant moment in the airport’s history. anna.aero thought this was too major of an event to miss and travelled to Frankfurt Airport on the day.

Having seen passenger numbers grow by 76% between 1991 and 2000, traffic has grown by less than 10% during the subsequent decade, partly as a result of capacity constraints. The third runway is for take-offs only, while the newest addition is a runway for landings.

In both 1991 and 2002, Frankfurt Airport had precisely 35.5% of the total German airport market while passenger numbers in the country grew by over 70% in the intervening 11 years. However, 2003 saw LCCs finally develop in the German market with their growth focused away from major hubs and instead targeting major regional airports. As a result, between 2002 and 2008, Frankfurt’s share of the German market fell from 35.5% to 28.0%. During this period, German airport traffic as a whole grew by 40%, but Frankfurt’s traffic increased by just 10%. 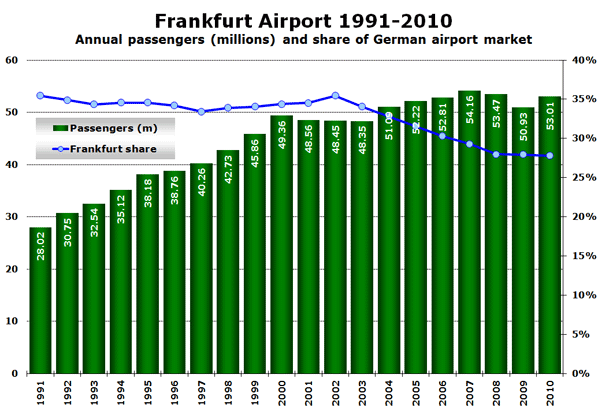 German flag-carrier Lufthansa has its biggest base at the airport and accounts for over 60% of scheduled seat capacity and around 65% of all scheduled flights, making it over 15 times bigger than its nearest rival, Condor. Thanks to Lufthansa, Star Alliance accounts for around 70% of seat capacity at the airport. Despite this, each week, the airport welcomes 100 airlines other than Lufthansa to the financial heart of Germany.

US and Germany battle for leading country market status

Analysis of German government statistics reveals that last year the airport handled almost the same number of passengers on domestic flights as it did on transatlantic flights to the US. Due to its central position, the airport ranks only third for domestic traffic in Germany, after both Munich and Berlin Tegel. 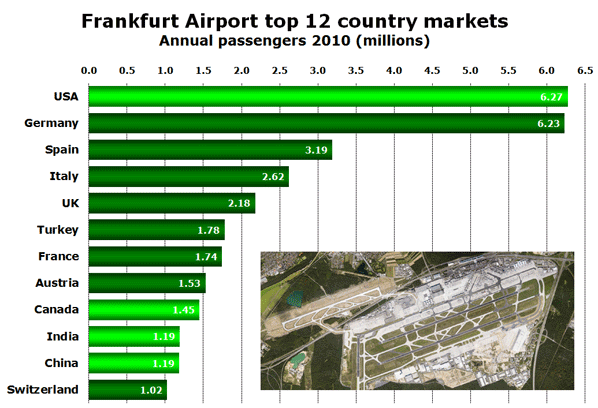 Apart from the US, other leading long-haul markets (shown in light green) are Canada, China and India. At present, a total of 96 foreign countries are served by direct non-stop flights from Frankfurt.

At the opening event for the fourth runway, Dr Stefan Schulte, executive board chairman of Fraport, explained that 40% of the airport’s traffic is intercontinental, while two-thirds of all intercontinental traffic in and out of Germany flies via FRA. “This underscores the real function of our airport: to serve as the gateway to the world for Germany and the German economy. No other airport in Germany can take over this function, which is why the expansion of Frankfurt Airport is so important to the country and to the economy of Hesse and Germany.”

The opening of the fourth runway and the resultant increase in runway capacity presents opportunities for new and existing carriers at the airport to develop their networks. The following table is a summary of known new services planned to start from the beginning of the winter season (30 October 2011) onwards.

For Lufthansa’s low-cost subsidiary germanwings, the new weekly service to Pristina marks the airline’s first route from its parent company’s biggest base. This raises the interesting question of what else Lufthansa may have in mind at the airport for its sister company and whether it could be used as a strategic tool in persuading other LCCs (or even airberlin) to stay away from the airport. Lufthansa’s nearest rival in the German market has less than 2% of flights at the airport and serves just two destinations with at least daily flights; Berlin Tegel and Palma de Mallorca.

One LCC that had announced a new service was Norwegian, which had planned to start a Copenhagen – Frankfurt service to compete with SAS and Lufthansa early in November. However, the route was quickly pulled when bookings presumably fell significantly short of expectations. As a result, none of Europe’s four biggest LCCs (Ryanair, easyJet, Norwegian and Vueling) offer flights to Frankfurt, a situation the airport is no doubt keen to rectify.