Sunday’s 8-7 victory by New Zealand’s All Blacks over France in the Rugby World Cup final played in Auckland has given a boost to the nation and Air New Zealand instantly chose to ride off the waves of the country’s exposure by launching a promo fare campaign.

Since anna.aero last looked at the New Zealand air travel market, the country’s three major airports (Auckland, Christchurch and Wellington) have seen their combined annual traffic grow from 21.5 million in 2006 to almost 25 million in 2010. 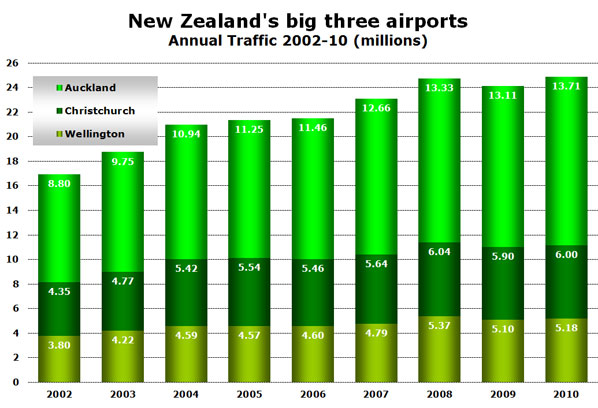 Since 2002, Christchurch and Wellington have seen passenger numbers grow by just under 40%, but Auckland has seen demand grow by 55% thanks to its growing focus as the main international gateway to the country.

Figures from Statistics New Zealand show that annual visitor arrivals in the last four years have grown by a modest 4.2%, with much of that growth having come in 2010 after 2008 and 2009 showed virtually no change over 2007.

Between 2006 and 2010, arrivals from India increased by 45%, from France by 32%, from Australia by 24% and from China by 16%. Conversely, during the same period arrivals from Korea were down 40%, from Japan down 36%, from the UK down 21% and from the US down 15%. During the last 12 months, notable new international services to New Zealand have included:

The Rugby World Cup has seen a clear surge in visitor numbers, especially from the UK as teams from England, Scotland and Wales (as well as Ireland) were all competing. According to government statistics for the week ending 11 September, visitor arrivals from the UK were up 250% (from around 2,000 to almost 7,000), while in the following four weeks, UK visitor numbers were up between 60% and 90% compared with the same period in 2010.

Virgin’s Pacific Blue been and gone in domestic market

The three leading airports also dominate domestic air travel in New Zealand with a combined capacity share of over 70% of the NZ market. Five further airports have capacity shares of between two and four per cent. 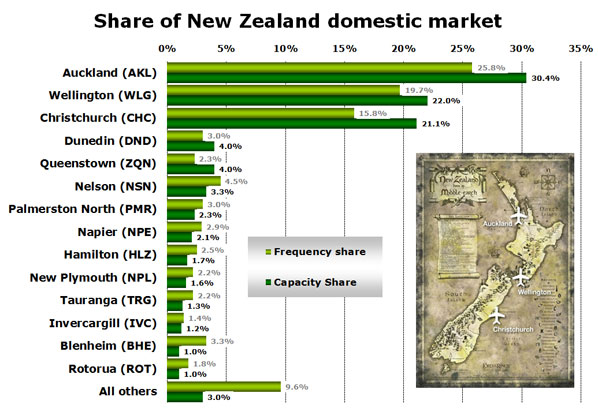 Back in November 2007, Pacific Blue, an airline owned by Virgin Blue (now Virgin Australia), began domestic services in New Zealand between the three major airports. Just under three years later, in mid-October 2010, the airline withdrew from the market, leaving Air New Zealand with Jetstar as its only real competitor in the domestic market. Air New Zealand has an 83% share of the market with Jetstar’s six routes (Auckland to Christchurch, Dunedin, Queenstown, and Wellington; and Christchurch to Queenstown and Wellington) accounting for most of the remaining 17%.

This week sees the resumption of commercial flights at Kapiti Coast Airport (formerly known as Paraparaumu Airport) with Air Nelson operating 18 weekly departures on behalf of Air New Zealand to Auckland, using Q300s. Until the opening of Wellington International Airport in the late 1950s, the facility served as the main airport for the country capital, but has recently been upgraded and enhanced to be able once more to handle scheduled services.