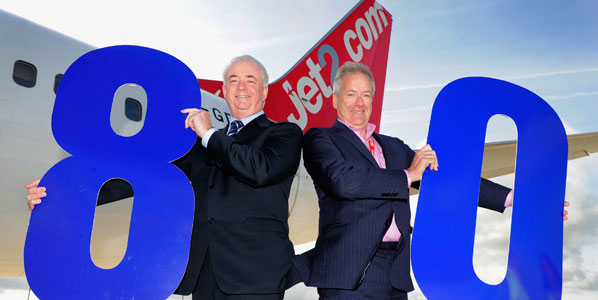 One of three airports in northern England to report positive traffic growth during the summer is Leeds/Bradford Airport, which last week celebrated its 80th anniversary. The airport’s CEO John Parkin celebrated with Ian Doubtfire, Managing Director of the airport’s largest airline, Jet2.com.

Latest figures from the UK Civil Aviation Authority show that passenger numbers at the country’s airports last month was 1.8% up on September 2010, which is below the rolling-year growth (October 2010 – September 2011 versus October 2009 – September 2010) of 2.9%. This follows modest growth of 1.7% in July and just 0.5% in August as the UK economy continues to show little sign of significant improvement. Analysis by anna.aero across the various UK regions reveals that some airports are performing significantly better than others. 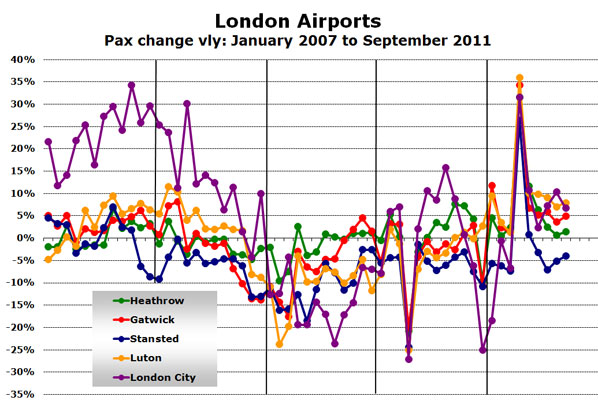 London’s airports (with the notable exception of Stansted) continue to perform above the national average with London City even reporting double-digit year-on-year growth in August, the second time it has achieved that distinction this year, helped by the launch of a number of summer-only routes by various airlines, including British Airways CityFlyer’s routes to Faro and Malaga back in June. 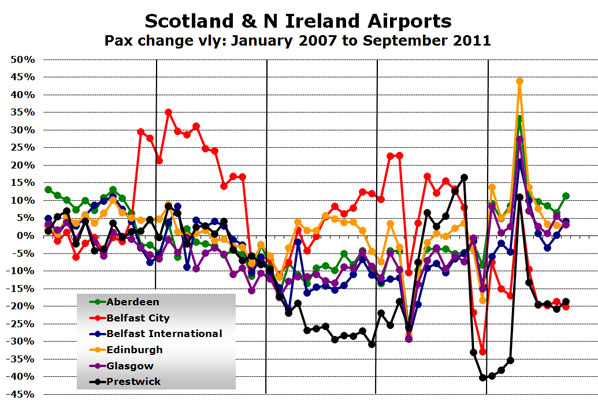 In Scotland and Northern Ireland, those cities served by two airports (Belfast and Glasgow) have seen the airports suffer mixed fortunes. In Belfast, Belfast International has reported growth during the summer, while Belfast City has seen passenger numbers drop by around 20%, mostly as a result of Ryanair axing its flights from the airport. In the case of Glasgow, Prestwick Airport has seen traffic drop by 20% this summer compared to last, while Glasgow International has seen modest growth. BAA, the owners of both Glasgow International and Edinburgh, recently announced that as a result of being obliged to sell one of the airports, it had decided to keep Glasgow and sell Edinburgh. This is believed to be because Edinburgh is more likely to generate more interest and a higher price than Glasgow. 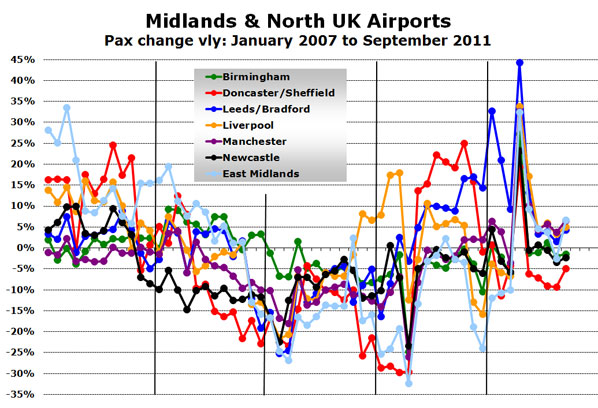 In the Midlands and North region, three of the seven airports have seen passenger numbers fall this summer. At Doncaster/Sheffield, the fall is between 5% and 10%, while in Birmingham and Newcastle, the drop is much less. The remaining four major airports in the region (East Midlands, Leeds/Bradford, Liverpool and Manchester) all reported growth of around 5% for the summer months. 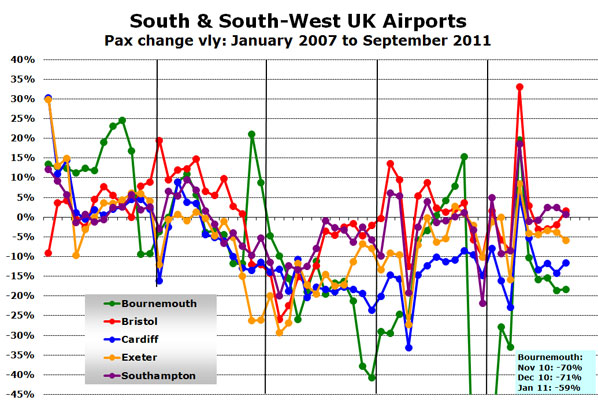 The region struggling the most for traffic growth is the south and south-west of the UK. During the five summer months (May to September), only Bristol (twice) and Southampton (three times) reported monthly year-on-year growth. Bournemouth and Cardiff have both reported passenger numbers falling by more than 10% in each of June, July, August and September.

CAA data for the rolling year reveals that among all UK airports with commercial services, the fastest-growing airport is London Southend, where passenger numbers are up a massive 660% to almost 34,000. Manston (also known as Kent International) is reporting growth of 146% to just over 40,000. Among airports with at least 100,000 annual passengers, the fastest-growing airports are City of Derry (+17.4%), Leeds/Bradford (+11.7%) and London Luton (+8.0%).

In the 57 months between January 2007 and September 2011, London Stansted has reported year-on-year traffic declines in 48 of them, Glasgow International and Newcastle in 43, and Cardiff in 42.