Flybe takes over Finncomm with help from Finnair; expands services from Helsinki and Tallinn 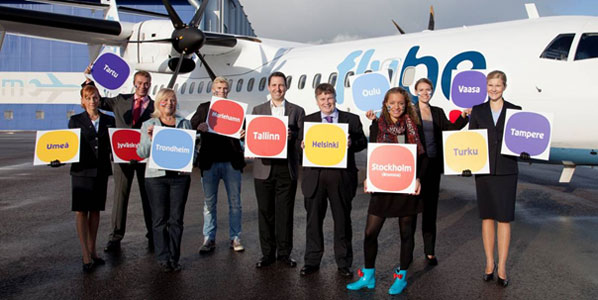 The start of the winter season saw the official handover of Finnish Commuter Airlines (Finncomm) services to Flybe, which acquired the airline during the summer as a joint venture with Finnair, with Flybe owning 60% and Finnair 40%. The airline operates a fleet of 10 ATR 72-500s, four ATR 42-500s, and two Embraer E-170s leased from Finnair. The table below summarises the airline’s operation as Finncomm at the beginning of October, and as Flybe at the beginning of November. 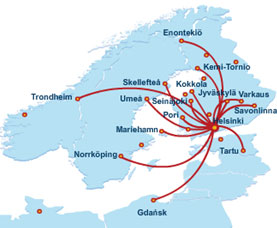 Five new routes from Helsinki and two from Tallinn

The start of the winter season saw Flybe launch new routes from Helsinki to Jyväskylä and Mariehamn in Finland; Umeå in Sweden; Trondheim in Norway; and Tartu in Estonia. In addition, the airline has launched flights from Tallinn in Estonia to Stockholm Bromma (in Sweden) and Tampere (in Finland), both operated with three flights per day on weekdays. In mid-November, three further routes from Tallinn will be launched to Oulu, Turku and Vaasa, all of which are in Finland.

Speaking before the launch of services on Sunday Mike Rutter, Managing Director Flybe Europe, commented: “We are delighted to welcome our first passengers on board at the start of the 2011/12 IATA Winter season. We hope they will enjoy their first ever Flybe experience. It is one that offers quality, friendly service at affordable prices. We hope also that their first flight, whether it be on Sunday or some time later, will become the first of many as they realise the benefits of convenient, point to point travel and become valued frequent fliers. We have all been working hard to ensure that everything is ready for our first passengers. We also recognise that we have had to make some tough decisions to ensure that we can give as many passengers as possible access to the services they need. We assure our customers that we remain committed to providing schedules that are both economically and environmentally sustainable. This weekend marks yet another important milestone for the Flybe brand and moves us one step closer to creating more Flying Finns and to becoming the preferred regional airline for the Nordic and Baltic region. Welcome on board!”

Juha-Pekka Pystynen, CEO of Finavia and Airport Director of Helsinki Airport, comments: “The Finnish airport operator Finavia warmly welcomes Flybe to operate in Finland and looks forward to future growth. Flybe not only provides important regional services from Helsinki to other airports in Finland but also strengthens Helsinki Airport’s position as a popular transfer hub between Europe and Asia.”