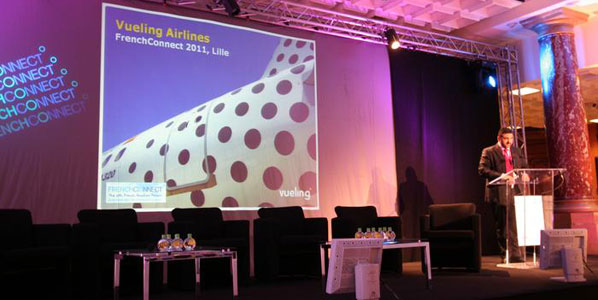 Vueling CEO Alex Cruz at FrenchConnect 2011 in Lille. Six of the 13 new announced routes are in France, which will also see new Vueling services next summer from Nantes to Malaga, Rome and Venice, as well as from Lyon to Palma de Mallorca. Cruz is speaking again at FrenchConnect 2012 at Disneyland Paris hosted by Paris-Vatry Airport.

Vueling, Europe’s fourth biggest LCC, and the biggest airline at Barcelona’s main El Prat Airport, has announced plans to start 13 new routes next summer from Spain’s second busiest airport. Last year, the Spanish LCC that is part-owned by Iberia carried over seven million passengers at the airport, accounting for one in four passengers. In the first nine months of this year, it has carried 5.9 million passengers at the airport, representing 22.2% of the total. Vueling remains the busiest airline at the airport ahead of Spanair and now Ryanair, which after opening its base at the airport last September is currently accounting for almost 10% of all passengers and is the main reason that traffic at Barcelona airport has grown by 20% in the first nine months of 2011, compared with an average of 7.3% across Spanish airports as a whole. 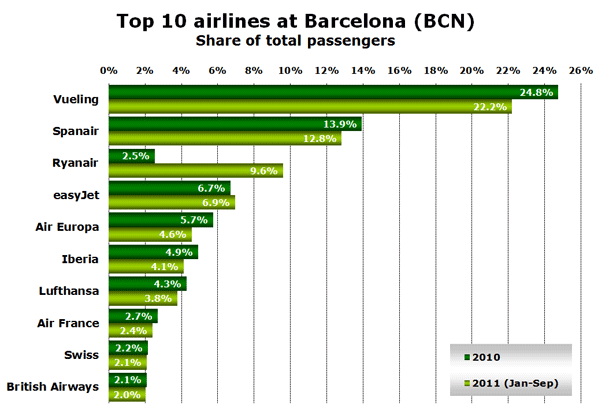 The 13 new routes can be split between those that are new destinations for the airport (as well as Vueling) and those on which Vueling will be competing with other carriers.

Six of the 13 new routes are in France, which will also see new Vueling routes next summer from Nantes to Malaga, Rome and Venice, as well as from Lyon to Palma de Mallorca.