AeroMexico’s carriers have 40% of Mexican domestic market which grew 16% in September; international traffic up 17% 13 September: Volaris helps with the 16% domestic traffic growth in September by launching Mexico City to Zacatecas in north-central Mexico. The route was operated by Mexicana until its demise a year ago as well as by Aeromar until March this year. Competition now comes from Aeromexico.

Mexico’s domestic air travel market saw a 16% surge in passenger demand in September. As Mexicana collapsed in August 2010 this is the first month where a year-on-year comparison does not include Mexicana operations. Interjet, which had less than 6% of the market in early 2007 is now consistently the biggest single carrier in the domestic market and had a 25% share of the market in Q3. However, AeroMexico and AeroMexico Connect combined still have about 40% of the domestic market. 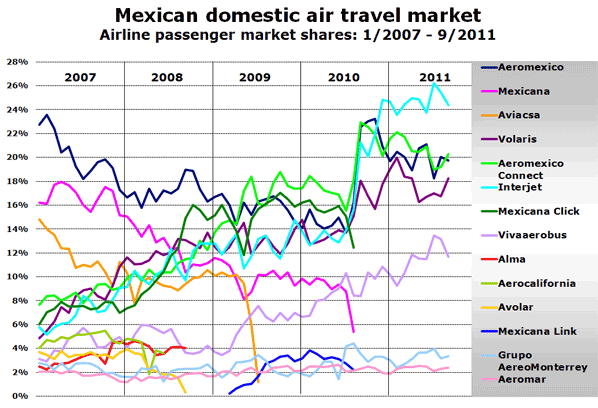 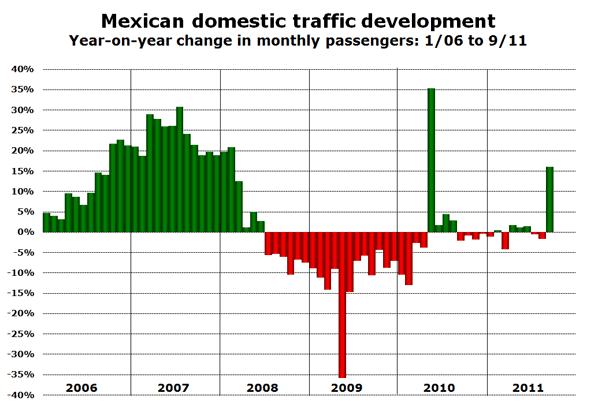 While September’s 16% growth appears impressive, it is worth noting that if compared with September 2007, domestic traffic is still around 5% below the pre-recession levels prevailing at that time.

International traffic up 17% in September

As with domestic traffic, international traffic growth appears strong in September as a result of Mexicana’s absence. In addition, the US FAA’s decision last December to upgrade the safety rating of Mexico’s airports, thus allowing Mexican carriers to start new routes to the US this year, is also having a tangible benefit. 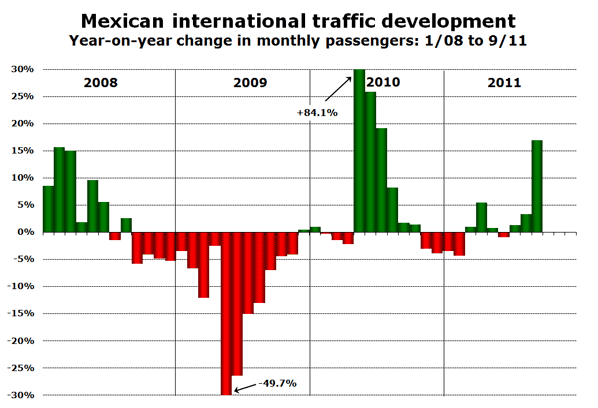 During September and October, the following new international services have commenced:

This week sees the launch of three new US routes from Volaris, which is connecting Mexico City, Morelia and Zacatecas with Chicago Midway, each route being operated with just two weekly flights.