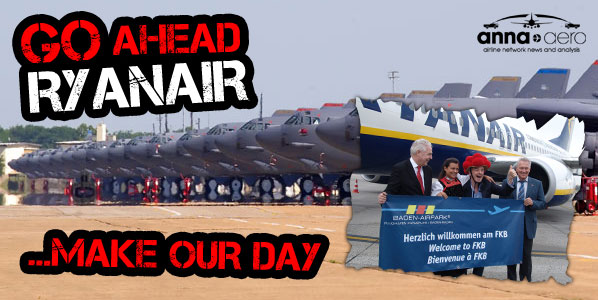 Not that BAD: O’Leary (in hat) announcing the Baden-Baden (Karlsruhe) Airport base last month. The real BAD, Barksdale Air Force Base in Louisiana, would offer significant competition for Ryanair's two based 737-800s with 44 B-52 Stratofortress aircraft all capable of nuclear strike.

Here’s a curious one. When Michael O’Leary presented Ryanair’s impressive 20% half year profit jump on Monday, he also showed off lots of slides of future developments including a new two aircraft base at “BAD” opening next March.

As we all know, BAD is the IATA three-letter code for Barksdale Air Force Base in Louisiana and indeed it is a significant base – of the US Air Force 2nd Bomb Wing, which has 44 B-52 Stratofortress aircraft capable of “nuclear deterrence and global strike operations in support of combatant commanders.” 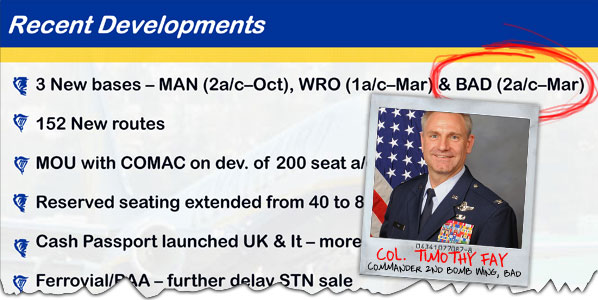 O’Leary’s surprise announcement of the “BAD” base opening next March. Inset: Colonel Timothy G. Fay, commander 2nd Bomb Wing at BAD, Barksdale Air Force Base, Louisiana: “We won’t be drawn into a contest with a civilian airline.”

We called the base commander, Colonel Timothy G. Fay, to hear how he might set about using his assets to potentially annihilate the challenge from Ryanair, although his spokesman, Major Bryan Purtell, would only say he “would not be drawn into a contest with a civilian airline.”

We’re wondering whether Mr O’Leary meant to refer to ‘FKB’ – Baden-Baden (Karlsruhe) Airport – where Ryanair announced its 47th new base last month. If this is the case, in an interesting contrast, O’Leary forecast that the FKB base “will sustain up to 800 jobs at Baden-Baden (Karlsruhe) Airport and in the surrounding region” whereas the 2d Bomb Wing at Barksdale/BAD directly employs some 15,000.