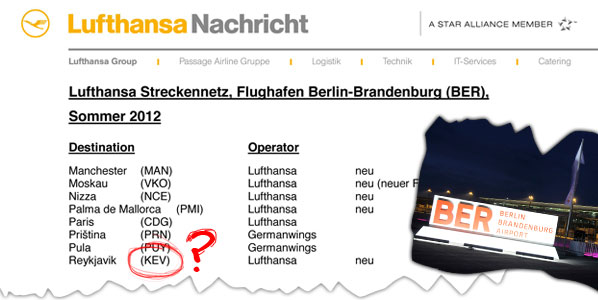 Going up-market. Some of the new routes announced by Lufthansa at BER are in fact services which are operated by germanwings at Schönefeld. After Ryanair's BAD mistake, we now have Lufthansa announcing flights to Reykjavik from BER but listing the airport code as ‘KEV’. As we all know, KEV is actually the IATA code for Kuorevesi in Finland (population 2,804).

It seemed inevitable that sooner or later, Lufthansa would have to respond to the opening of a new single airport to serve the German capital by considerably expanding its route network from the city, which up until now had consisted almost entirely of domestic routes. Although the announcement that the carrier would be launching service to 29 new cities (and changing airport in Moscow) with a grand total of 135 new weekly departures sounds impressive, given that the airline already operates almost 400 weekly departures from Berlin Tegel, the growth in operations is only around 35%, although the number of based aircraft will increase by two-thirds from nine to 15.

A closer look at the 29 new cities that will be served by Lufthansa from Berlin reveals that they are spread across 16 countries, of which only France (thanks to existing Paris CDG services), and the UK (thanks to existing London Heathrow services that are operated on its behalf by bmi) are already served. A summary of the new routes by country market is provided in the following table, which also shows planned weekly frequencies.

What Lufthansa has chosen not to mention is that 10 of these 30 destinations (see table) were served this summer by its low-cost subsidiary germanwings from Berlin Schönefeld. Croatia, Italy and Spain will all be served by Lufthansa with four new destinations, followed by France with three. In terms of weekly flights, Italy leads the way with 26, followed by the UK (14), Spain (13) and Sweden and Switzerland with 12 each.

Other routes served by subsidiaries and alliance partners

As a result of these changes, germanwings will be left serving just seven destinations from Berlin; three domestic routes on which it competes with Lufthansa (Cologne/Bonn, Munich and Stuttgart), and four international destinations to Heraklion (Greece), Maastricht (Netherlands), Pristina (Kosovo) and Pula (Croatia). Lufthansa’s other airlines will continue to serve Brussels (Brussels Airlines), Vienna (Austrian) and Zurich (Swiss).