We have decided to go ahead and publish this article, despite today’s news of the tragic earthquake, in recognition of Turkey’s great strides in the face of adversity.

It may not be the biggest carrier in Europe in terms of passenger numbers, fleet size or seat capacity but in one respect Turkish Airlines leads the way. No other carrier in Europe offers as many non-stop destinations from a single airport as Turkish Airlines now does from its Istanbul Atatürk base. This winter, the Turkish national carrier and Star Alliance member will offer non-stop service to 172 destinations, well clear of its nearest rivals Lufthansa (158 destinations non-stop from Frankfurt) and Air France (149 from Paris CDG). Turkish Airlines first passed Lufthansa back in the summer of 2010, but Lufthansa regained the lead in this measure this summer. However, with a recent surge of new route activity, it seems that Turkish Airlines has taken the lead once and for all, unless the opening of the fourth runway at Frankfurt encourages Lufthansa to start adding many more new routes. 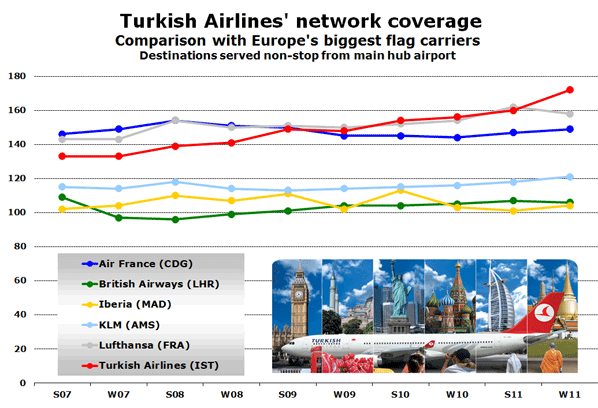 Source: OAG Max Online for first week in February and August of each year.

Among Europe’s LCCs, Ryanair’s biggest base at London Stansted offers 94 destinations this winter,  easyJet’s London Gatwick base connects non-stop with 68 destinations, and Norwegian’s Oslo base offers 57 non-stop destinations. However, all three of these carriers offer rather more destinations during the peak summer season.

Turkish Airlines is well on target to easily pass 30 million passengers in 2011. This represents a trebling of its passenger numbers in just seven years. Since 2003, passenger numbers have grown by at least 10% every year. In the first three quarters of 2011, passenger numbers are up 9.6%, suggesting that double-digit growth is once again possible in 2011, especially given the new routes started this year. 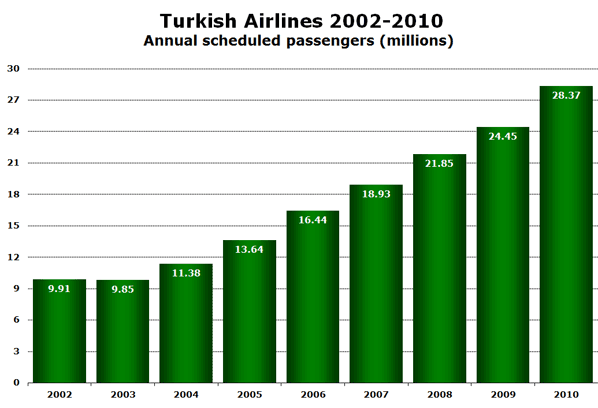 Statistics published on the airline’s website reveal that in the first nine months of 2011 traffic (as measured by RPKs – Revenue Passenger Kilometres) is up 20%, although there are significant regional variations. Domestic traffic is up just 5% and now represents only 15% of the airline’s total RPKs, but domestic passengers still represent 46% of the airline’s total. Traffic growth has been fastest to North America (+60%) and the Far East (+33%), while European traffic is up just 11%. 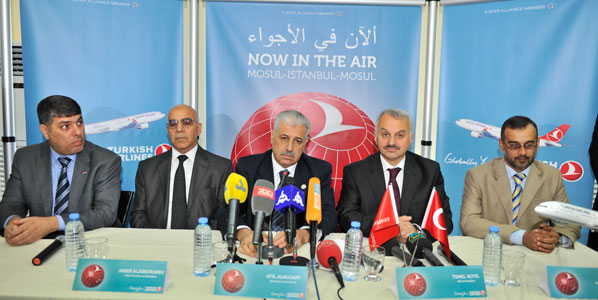 Is THY fast becoming the national airline of Iraq? THY has cleverly seized the feed opportunities to next-door Iraq. Last week’s latest THY launch, to Mosul in Northern Iraq, is the airline’s sixth Iraqi destination which puts it exactly level with Iraqi Airways itself.

At the beginning of this year, anna.aero examined Turkish Airlines’ network growth in 2009 and 2010. By the end of 2011, some 20 new routes will have been added from Istanbul, the latest to be announced being London Gatwick, which is scheduled to start a few days before Christmas.