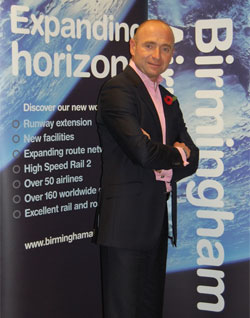 Expanding horizons: William Pearson (44) is Birmingham’s brand new Head of Route Development having previously been Head of Aviation Sales at Manchester. Pearson is no stranger to Birmingham, having previously set-up and managed the Birmingham arm of Airport Coordination Ltd (ACL). He also tells anna.aero: “I grew up just the other side of Sutton Coldfield, so I’m a Brummie really.”

The UK’s third busiest airport outside of London (after Manchester and Edinburgh) is Birmingham Airport, which this year completed work on integrating its two terminals more efficiently by installing a new centralised security area and also enhancing the airport’s retail offering. Between 1994 and 2003, traffic at the airport grew by over 85%, but since then annual passenger numbers have remained steady at between 8.5 and 9.5 million.

From Ryanair to Emirates; Birmingham’s changing mix of airlines

However, the last decade has seen a significant shift in the type of carriers playing a leading role at the airport. In 2000, British Airways (then represented by a complicated and unwieldy mix of British Airways mainline, British Airways Regional, Brymon and Maersk Air Ltd**) accounted for almost half of all scheduled seat capacity at the airport, offering a mix of domestic and European services. The ending of the franchise agreement with Maersk Air Ltd (the Birmingham-based subsidiary of the Danish Maersk Air Group) started a chain reaction which resulted in the termination of all British Airways services from the airport by early 2007. Maersk Air Ltd’s re-birth as regional airline “duo” in late 2003 lasted less than a year. Meanwhile, bmibaby established a base in January 2005 and Ryanair made the airport a base in 2008, increasing its network from just two destinations (Dublin and Shannon) to over 30 in less than a year. All the while, Jersey European, which briefly became British European, and then Flybe, was gradually adding new routes and capacity, and in 2007 took over what was left of BA’s operations (then branded as BA Connect) giving it new European destinations in France, Germany and Italy. 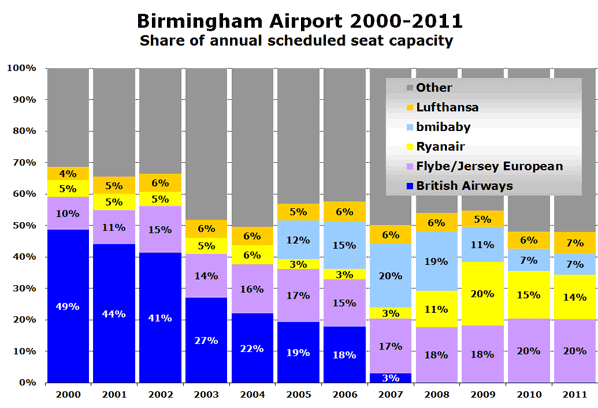 Another key airline at the airport is Emirates, which operates double-daily flights to Dubai. As a result, Dubai is now the airport’s second busiest single route with almost 500,000 passengers in 2010, not far behind Dublin with 535,000. 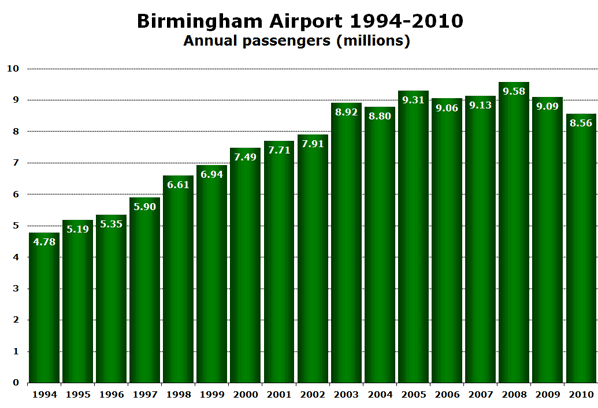 This winter has seen bmibaby re-launch flights to Prague after a two-year hiatus, and next summer the airline will resume flights to Barcelona, Lisbon and Rome. This is possible after the airline, whose long-term future remains unclear, decided to base a third aircraft at the airport. While all of bmibaby’s new routes are actually route resumptions, Monarch has announced plans to start some genuinely new routes in 2012. At the start of the summer season it will launch flights to three Italian destinations (Milan Malpensa, Rome and Venice) followed in May by twice-weekly flights to Dubrovnik in Croatia, and Heraklion in Greece.

More good news for the airport is the recent decision by Lufthansa to start daily flights to Birmingham from the new Berlin Brandenburg Airport when it opens next June. The Berlin route was last served by British Airways Connect, with weekly Embraer regional jet services from March 2006 until March 2007.

** anna.aero’s Editor Ralph Anker was Head of Business Development at Maersk Air Ltd in Birmingham from May 2000 to March 2001.