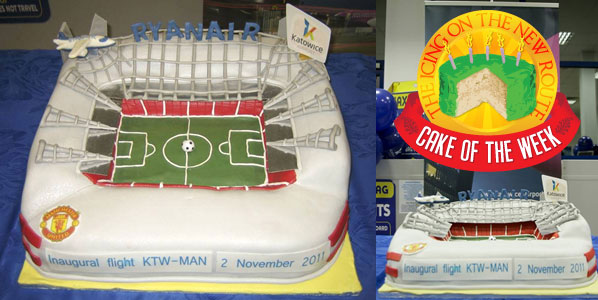 1,030 votes for the cake celebrating new air services to one of the host cities of the EURO 2012 football championships.

Well surely even the losers can agree that Katowice Airport’s stadium cake is a worthy winner in the record public Cake of the Week vote for the Winter Season Route Launches Part II. Katowice is one of the host cities in the Poland/Ukraine-hosted EURO 2012 football championships next year and has invested heavily in new facilities; the new air services are just reward for these efforts – and just as essential as great infrastructure for the successful hosting of the event.

Jetairfly’s Copenhagen to St Croix cake was a surprise runner up as a result of a successful tweeting campaign by Copenhagen – at one time only seven votes behind the victors. But it was not all good news for Ryanair – bizarrely its London Stansted to Malmö “Princess Cake” secured an un-royal three votes in the 2,528 vote competition.

Now the Winter Season is well underway, it’s now back to our secret judging panel for Cake of the Week, but we’d like to thank the 20 sporting entrants of the last two weeks, leaving anna.aero to wonder when we are going to get our own award for our contribution to excellence in international baking.