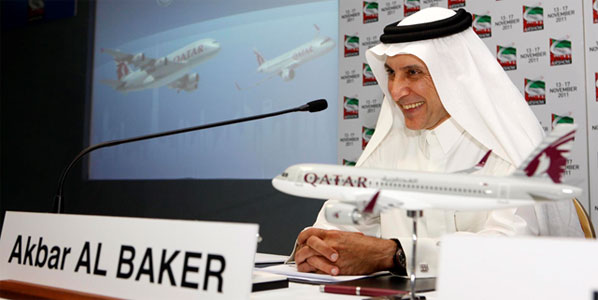 At Dubai this week (and about to say some harsh things about Airbus). By announcing Helsinki flights, Qatar Airways will become the first of the MEB3 carriers to serve four Nordic capitals: Copenhagen, Helsinki, Oslo and Stockholm. Qatar has launched 14 other destinations in 2011.

While Qatar Airways is likely to remain smaller in total size than its near neighbour Emirates for the foreseeable future, one area in which the Doha-based carrier seems keen to overtake its Dubai-based rival is with regards to the number of destinations served. This week, at the Dubai Air Show, the airline announced another batch of new routes which it plans to launch during the course of 2012, though exact start dates have yet to be finalised. Our last comparison of the networks of the Middle East’s big 3 (MEB3) carriers revealed how quickly Qatar Airways had caught Emirates in terms of network spread with both carriers serving around 100 destinations with their scheduled passenger services.

Helsinki, Perth and Zagreb to welcome Qatar Airways in 2012

Speaking at the Dubai Air Show on Wednesday, Qatar Airways Chief Executive Officer Akbar Al Baker unveiled the new destinations, stressing the airline’s relentless expansion strategy was continuing with vigour. “We are continuing what we started back in 1997 when Qatar Airways was launched with new routes and new aircraft being introduced at an unprecedented rate to further strengthen what is truly a global network airline. Our mission has been to operate to key business and leisure destinations around the world, but also to underserved markets where others dare not venture into. We take bold decisions to serve certain markets because we believe it makes strong business sense. Today’s announcement shows the confidence Qatar Airways has in such a diverse range of destinations. We look forward to offering even greater choice to the travelling public that they so deserve.”