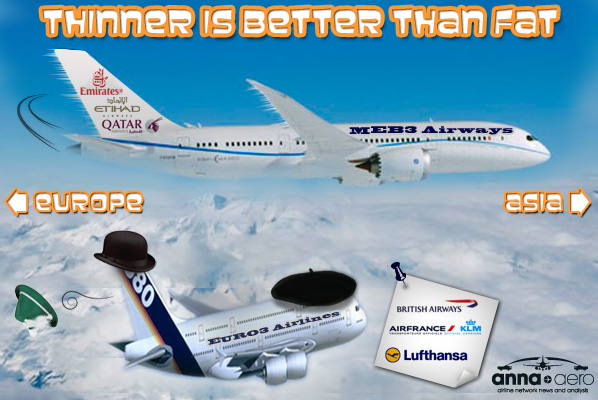 At the recent Dubai Air Show Emirates announced what it described as the single largest order in dollar value in Boeing’s history (for up to 70 777-300ERs valued at US$26 billion). This confirms that the biggest of the Middle East’s Big 3 (MEB3) carriers, just like local rivals Etihad and Qatar Airways, has no plans to reign in its ambitious growth plans. For many years all three carriers have been exploiting their geographic position, midway between Europe and Asia, to create 24-hour air travel hubs. Apart from connecting Europe and Asia all three carriers have also increasingly targeted Africa and North America to create truly global hubs. This analysis takes a closer look at the Europe-Asia market and what competition is provided by Europe’s global legacy carriers from the main European hub airports.

Combining the networks of Emirates, Etihad and Qatar Airways reveals that London Heathrow is by far the best served airport in Europe in terms of weekly frequencies. Between them, the MEB3 carriers operate 12 daily flights to Europe’s busiest airport. In second place, maybe somewhat unexpectedly is Manchester airport, also in the UK, with a total of seven daily flights. 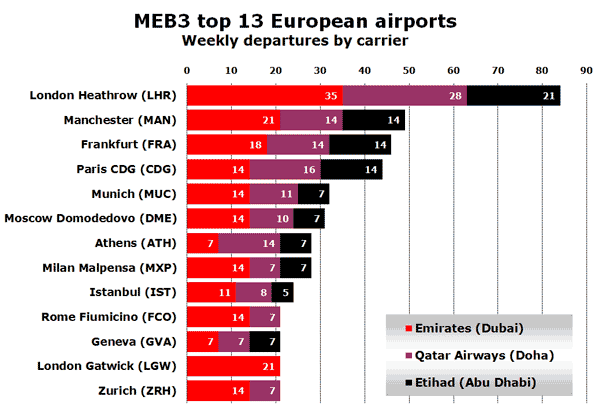 A total of 11 other airports in Europe welcome at least three daily flights from the MEB3 carriers, with Frankfurt and Paris receiving between six and seven daily flights from these carriers. Surprisingly absent from this list of leading European airports are Amsterdam (which is only served daily by Emirates) and Madrid (served just daily by Emirates and Qatar Airways).

No non-stop flights to Jakarta and Manila from Frankfurt, London, Paris

To see how Europe’s leading legacy carriers compare with the MEB3 airlines on major routes between Europe and Asia an analysis of OAG data was undertaken to determine the busiest airports in Asia (excluding Australasia), which confirmed that Beijing was the region’s busiest airport followed by Tokyo Haneda and Hong Kong. Where more than one airport serves a major city (such as in Tokyo and Shanghai) data for the two airports was combined. The three leading European hubs served by the MEB3 carriers are London Heathrow, Frankfurt and Paris CDG. Analysis of the weekly non-stop flights provided by all airlines to the 14 leading Asian cities shows that London Heathrow has 325 flights to these 14 cities, Frankfurt 180, and Paris CDG 178. 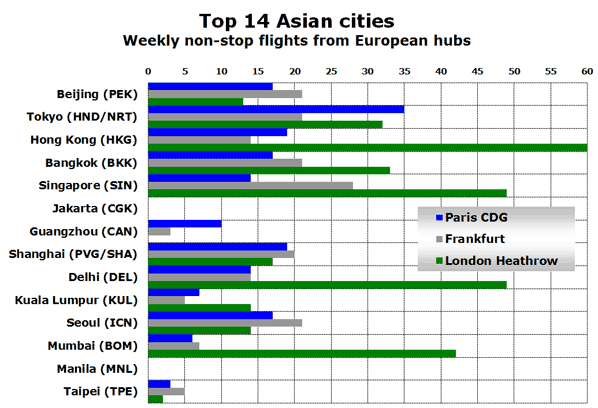 Hong Kong (93 weekly departures), Singapore (91) and Tokyo (88) are the best served cities from these three European hubs, followed by Delhi and Bangkok. Two airports, Jakarta in Indonesia and Manila in the Philippines, are not served non-stop from any of these three airports. However, Manila is served non-stop by KLM from Amsterdam, and KLM also serves Jakarta (but via Kuala Lumpur), while Garuda connects the two cities via Dubai.

No MEB3 flights to Taiwan at present 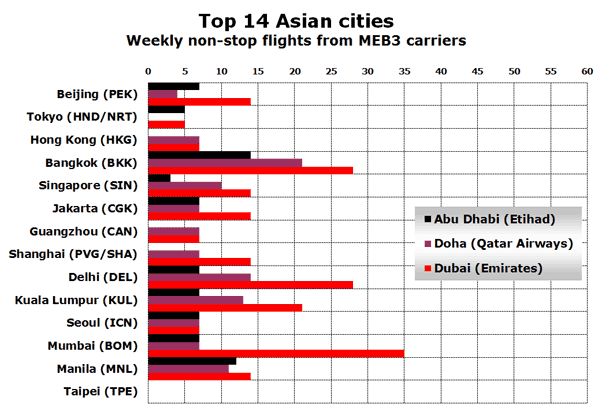 Analysis of OAG data for the first week of November helps highlight which of the leading European global hub carriers (Air France, British Airways, KLM and Lufthansa) and which of the MEB3 carriers serve which Asian markets from their respective hubs. Given that the four leading European hub carriers have extensive European networks this gives a reasonable indication of which Asian destinations can be reached flying on a single airline and with no more than one stop en-route.

Note: “MEB3” is a term invented by anna.aero. You may use it freely, but just remember it was invented here.