Etihad on track for 8 million passengers in 2011; Düsseldorf, Chengdu, Shanghai and Nairobi next new markets More of this in 2012? A firetruck salute welcomes Etihad to Malé on November 1, while the group photo celebrates Etihad’s arrival in Mahé in the Seychelles just the next day. Just two new routes have been revealed for 2012: Shanghai (1 March) and Nairobi (1 April), although the airline says it will serve Tripoli soon. 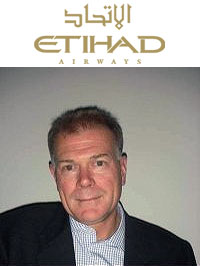 Etihad Airways began commercial operations from its home base in Abu Dhabi in November 2003 and is thus celebrating its eighth birthday this month. The airline claims to be the world’s fastest-growing start-up airline and operates an ever-expanding fleet of over 60 passenger and cargo aircraft. In 2012 a further seven aircraft are expected to join the fleet; four widebody 777-300ERs and three narrowbody A320s. In the third quarter of this year Etihad reported carrying 2.25 million passengers at a record high load factor of almost 81%, suggesting that the airline is well on target to transport around eight million passengers in 2011.

Passenger network will reach 70 destinations by end of 2011

Etihad currently operates non-stop flights from Abu Dhabi to 64 destinations worldwide. A further three destinations (Brisbane, Cape Town and Nagoya) are served via an intermediate stop. So far this year new destinations added to the network have been Bangalore (back in January), Male in the Maldives, and the Seychelles, both launched earlier this month. Before the end of the year two more destinations will be added; Düsseldorf in Germany (the first new European destination since Larnaca in June 2009) and Chengdu in China. A summary of all the new destinations launched in the last five years is provided in the following table.

Just two new routes have so far been revealed for 2012; Shanghai in China (starting 1 March) and Nairobi (starting 1 April). In October the airline’s CEO revealed that it would also start serving Libya’s capital Tripoli with three weekly flights “as soon as the NATO no-fly zone is lifted, the airport is declared safe and all appropriate infra-structure is in place.” As yet there is no indication when this will be.

Sydney is biggest route as measured by ASKs

A ranking of Etihad’s top 15 routes in terms of capacity (as measured by ASKs – Available Seat Kilometres) reveals that Sydney comes out on top, followed by Manila, Chicago O’Hare and London Heathrow. 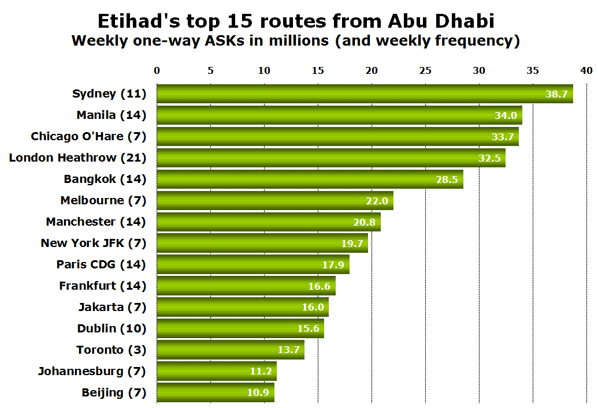