SpiceJet is the largest October gainer with nearly a three-point increase in domestic share driven by the Q-400 introduction. The airline just added three destinations from its Chennai base using the new turboprops – daily flights now operate non-stop to Goa, Mangalore, and Tiruchirapilly. The Tiruchirapilly route (where this lamp lighting ceremony is taking place) is the most competitive rivalling Air India Express (nine weekly flights), Jet Airways (double daily flights) and Kingfisher (eight flights per week).

Latest data from the Indian DGCA (Directorate General of Civil Aviation) for October reveals that Kingfisher Airlines has seen its share of the Indian domestic air travel market fall from 18.8% in August to 16.7% in October. As a result, it has now been overtaken by IndiGo whose market share has risen from 18.7% to 19.6% in the same period. The Jet Airways group of airlines (Jet Airways plus JetLite) has a combined share of 24.8%, the first time that it has had less than 25% of the market since June 2009. Despite a 2.1 percentage point drop in its domestic market share, Kingfisher still transported more domestic passenger in October 2011 than it did in October 2010. Also worth noting is that SpiceJet’s market share has now reached an all-time high of 16.1%, up 2.7 percentage points in just two months, helped by launching a raft of new routes with its new Q400 aircraft.

DGCA figures for October also show that Indigo had the highest seat load factor figure of 84.2%, followed by Kingfisher (79.3%) and SpiceJet (78.0%), while Jet Airways had the lowest load factor at just 70.8%. IndiGo and GoAir had the lowest flight cancellation rates in October (both 0.2%), while Kingfisher (2.8%) and Air India (3.0%) had the highest. Air India also had the worst punctuality record (80%), with all other carriers achieving between 89% and 94%. 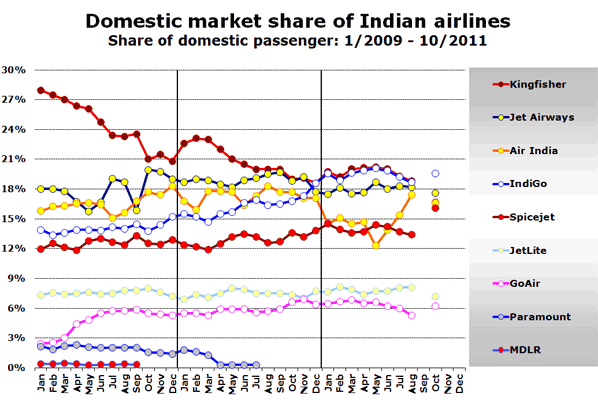 Source: Airports Authority of India, DGCA (If any of our readers have the market share figures for September 2011 do please let us know).

For the third straight month (and the sixth time in the last seven months), capacity growth (ASKs) outstripped demand growth (RPKs), which helps explain the poor financial performance of many of the country’s airlines.

Domestic air traffic continues to grow at around 20% in 2011, with October data indicating that passenger numbers were up 17% and that year-on-year, demand was up 18.3%. 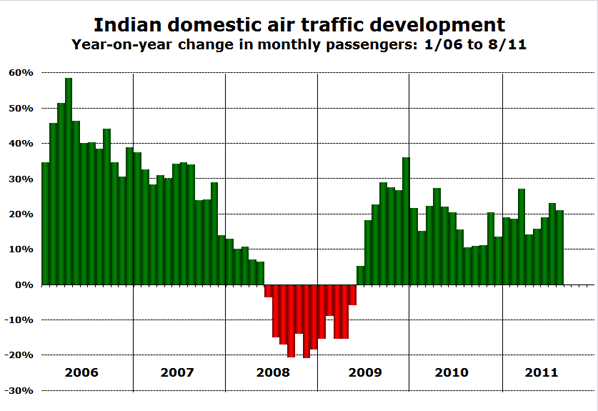 Figures from the Airports Authority of India show that international traffic passing through the country’s airports rose by just 3.7% in August, the most recent month for which data is currently available. That is the lowest growth rate since May 2009. 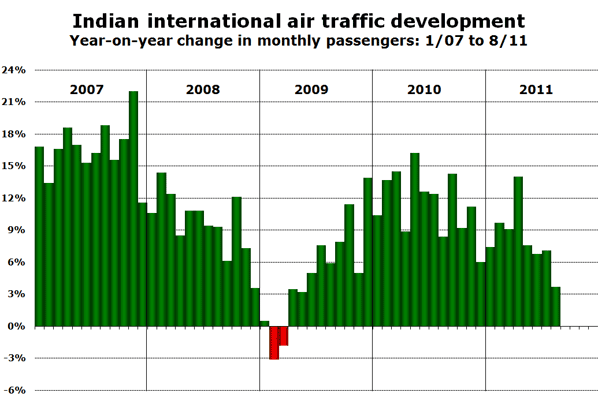 Having served its five-year notice period, IndiGo has been busy developing its international network. Having started flights from Delhi to Bangkok, Dubai and Singapore in September, it has since added flights from Mumbai to Bangkok, Dubai, Muscat and Singapore in October, and also launched service between Delhi and Kathmandu in Nepal on 28 October.

The fastest growing airports in August for international services were Trichy (+35.5%), Cochin (+14.1%) and Delhi (+9.9%). International passenger numbers were down 2.9% in Hyderabad and down 3.0% in Bangalore.