“The fastest way to get from East Texas to West Africa” –  this week’s launch of daily services  between Houston and Lagos by United. "This flight will link two energy capitals” said United (which will eventually deploy its new 787s on the route).

Much has changed in the Nigerian air transport market since anna.aero last analysed activities some three years ago. Passenger numbers at the country’s four main airports (Lagos, Abuja, Port Harcourt and Kano) have grown (after several years of stagnation) from around the seven million mark in 2007 to almost 12 million in 2010. The country’s busiest airport serving the capital of Lagos, has seen traffic grow by 50%, while demand at the second busiest airport of Abuja has almost doubled. 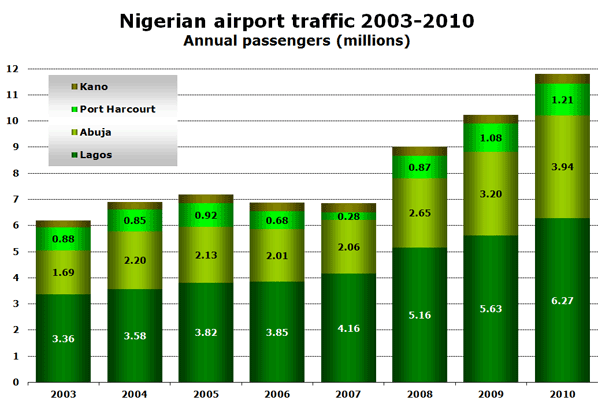 A major driver of this growth has been the emergence of Arik Air as an airline of significance. Despite the demise of local rival Bellview Airlines, the downsizing of Chanchangi Airlines, and the restructuring and rebranding of Virgin Nigeria as Air Nigeria, Arik Air has built an extensive domestic network (where it is now the dominant carrier) as well as launching long-haul routes to London and New York. In the first half of this year the airline carried over one million passengers.

The key London route was recently in the news when the Nigerian Civil Aviation Authority announced that they were going to fine British Airways $135m and Virgin Atlantic $100m for alleged price-fixing and collusion, a charge both airlines have rejected. This appears to have followed problems that Arik Air had in maintaining slots at London Heathrow airport as a result of reducing its operations this summer. Arik Air’s website is currently running a ‘Travel Information’ announcement saying: “Following a period of scheduled maintenance checks we wish to inform you that our flagship wide-body Airbus 340-500 aircraft has resumed daily scheduled operations on Lagos-London-Lagos route from October 27, 2011.” British Airways and Virgin Atlantic also both offer daily flights between the two airports.

Recent route developments at Lagos airport have seen Continental launch daily flights from Houston last week while merger partner United will end its Washington service in December. Another carrier launching a new service to Lagos is Royal Jordanian which will initiate twice-weekly flights from Amman early in December.

Proving that the local airline market is still developing, Dana Air recently celebrated its third birthday by revealing that it had flown almost 1.3 million passengers since inception. FirstNation Airways is a new carrier which recently began service between Lagos and Abuja and is offering up to three daily flights in each direction using an A320. The airline has acquired a total of three A320s, all previously operated by Gulf Air, and leased from Aviation Capital Group. Routes to Kano and Port Harcourt are advertised as “coming soon”.