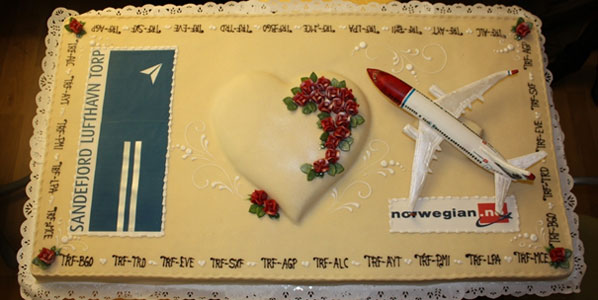 As part of Norwegian’s expansion next summer, the Nordic low-cost airline has announced Sandefjord Airport Torp near Oslo in its home country Norway as its next base. The airport, which already has two Spanish routes with the airline, will gain an additional eight routes to Antalya, Bergen, Berlin, Harstad/Narvik, Gran Canaria, Nice, Palma de Mallorca and Trondheim.

Europe’s third biggest LCC, Norwegian, has unveiled plans to launch a further 34 new routes starting next summer. From nine Nordic airports, the new routes (of which 30 are international and just four domestic) will raise the carrier’s network to some 300 routes.

Last week, the airline announced that Sandefjord/Torp Airport south-west of Oslo would become a further base. Eight of the 34 new routes will be launched from this airport. The opening of the new Berlin Brandenburg Airport next June has encouraged Norwegian to add three new routes to the German capital from Aalborg, Sandefjord/Torp and Trondheim.

People living close to London Gatwick who want direct flights to Gothenburg (like anna.aero’s Deputy Editor!) will be pleased to see that easyJet’s decision to withdraw from the route in January will not leave a vacuum in the market for too long as Norwegian will launch the route on 29 March.

“Norwegian is a strong player in the Nordic market and a fast growing airline. Brand-new and more environmentally friendly aircraft with free in-flight WiFi has proven to be a success as more and more passengers choose to travel with us. With an expanding network, of nearly 300 routes, we are able to offer even more flexibility to our customers in terms of connecting flights,” said Norwegian’s CEO Bjørn Kjos.