Despite handling 17 million passengers annually (ranking it as the 28th busiest airport in the US in 2010), San Diego International Airport ranks as just the third busiest airport in California (behind Los Angeles and San Francisco). It is also the busiest single runway airport in the US, and the second busiest in the world after London Gatwick. Between 1990 and 2000 passenger numbers grew by just over 40% from 11.2 million to 15.8 million, but the last decade has been more difficult as demand peaked in 2007 at 18.3 million, and for the first time in the airport’s history passenger numbers have fallen three years in a row since then. 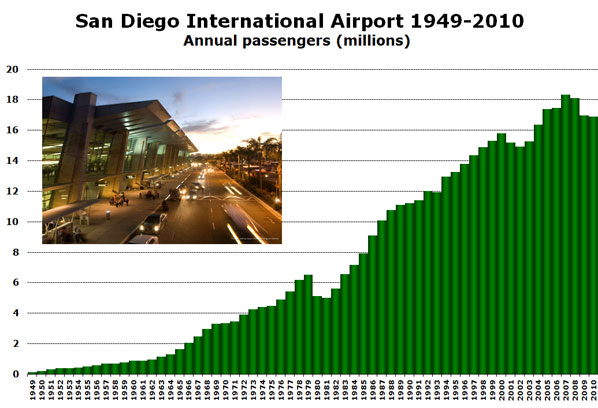 For the period January to October domestic passengers are down 1.4%, but international traffic is up 66%, resulting in total traffic being down just 0.4% overall. A major $1 billion building programme to create a new second terminal and improved vehicle access flows is due for completion in 2013 and should help the airport to hit the 20 million passenger mark in the next few years.

According to the airport’s own statistics Southwest is by far the leading airline at the airport accounting for almost 40% of passengers in 2010. According to OAG data for December the legendary LCC serves 19 destinations non-stop from the airport. 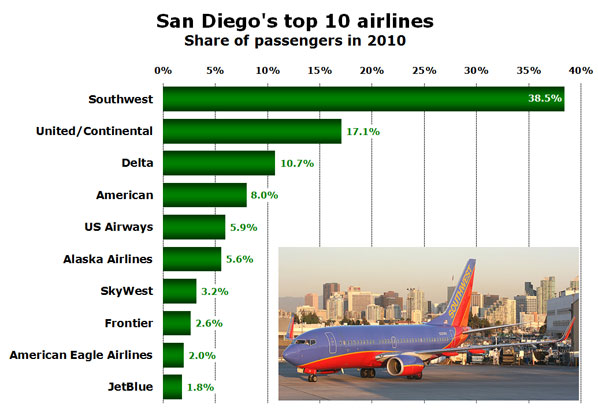 During 2011 a number of carriers have launched new routes to and from the airport. Back in January Frontier introduced flights to Omaha in Nebraska, three times weekly with an E190, to complement the airline’s existing daily service to Denver. However, the route was withdrawn during the summer season.

British Airways returned on 1 June with daily non-stop flights from London Heathrow, a route it had not served since 2003. This is now the airport’s only non-stop transatlantic service. From over the border in Mexico Volaris began daily flights from Guadalajara and Mexico City in mid-July. Another new carrier for the airport was Spirit Airlines which started flights to Las Vegas in early September and now serves the market with three daily flights, competing head on with Southwest.

Last week saw the introduction of a second carrier on the Honolulu route, with Alaska Airlines starting daily flights to compete directly with Hawaiian Airlines’ existing daily flights. Another new service starting in mid-December is a seasonal operation to Mammoth Lakes in California, which will be served daily by United Express operating a CRJ700.

Data from the US Department of Transportation’s Office of Aviation Analysis reveals that average fares from the airport have remained consistently between 4% and 8% below the national average. This should come as no great surprise as Southwest is the leading airline with almost 40% of the market, and several routes have significant levels of competition. 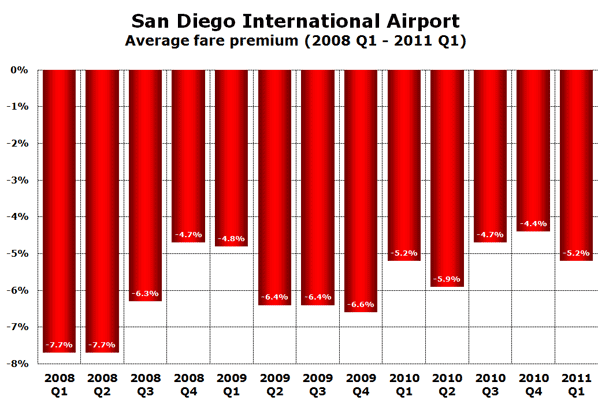