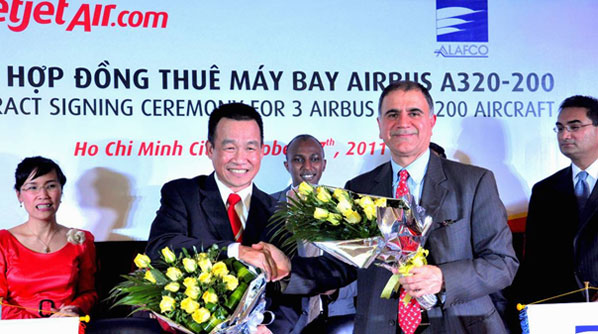 At the end of this month, VietJet Air will be Vietnam’s second low-cost carrier after Jetstar Pacific. The airline had initially planned a joint venture with AirAsia, but will instead launch operations on its own with three A320 aircraft leased from Alafco, as was announced in October.

In the last 12 years, traffic at these two main airports has more than quadrupled. The only exception to consistent growth was in 2003, when SARS put a slight hold to the country’s air passenger growth. The speed of growth has been the greatest in Hanoi, which had half of the passenger turnover of Ho Chi Minh City in 1998, but two-thirds in 2010. 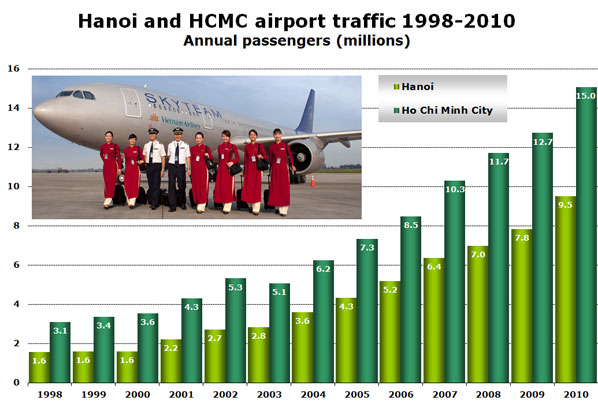 In the last four years alone, since Vietnam’s 2007 accession to the WTO, passenger numbers are up by 80%. Schedule data show that seat capacity this year is up 13% on 2010 and schedules loaded for the beginning of 2012 indicate further growth of more than 10%.

In the domestic Vietnamese market, which accounts for 45% of total seats, Vietnam Airlines holds the biggest share with 84% of capacity. Two other airlines currently compete with the state-owned SkyTeam member; Qantas’ local low-cost joint venture Jetstar Pacific has a 15% share, while regional operator Air Mekong contributes with the final 1% share.

However, the start-up low-cost carrier VietJet Air, in which AirAsia previously has shown interest, intends to start operations at the end of this year without a foreign partnership. The airline is currently selling tickets on the Hanoi-Ho Chi Minh City route with three daily flights to operate from 25 December. Other routes indicated, but not yet made available to book, are to Da Nang from both Hanoi and Ho Chi Minh City. 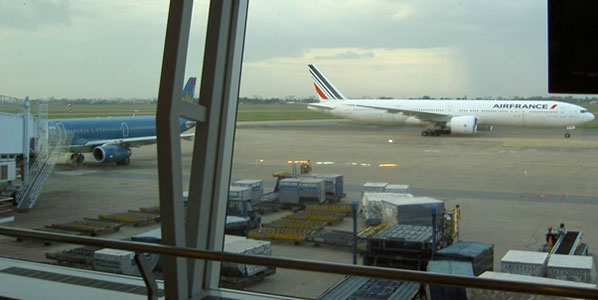 Air France now flies non-stop to Ho Chi Minh City in Vietnam (as here seen photographed by anna.aero’s Deputy Editor last week) after the airline last year upgraded its route from a one-stop via Bangkok. However, the airline at the same time discontinued its route to Hanoi, making room for LOT Polish Airlines and Qatar Airways to start serving the Vietnamese capital.

Internationally, Vietnam Airlines’ share of capacity is 40%. The next biggest airlines, with each 3-4% of Vietnam’s international capacity, are all foreign Asian airlines; Asiana, Thai Airways and Tiger Airways being the three biggest.

Notably, Air France has downsized its presence in the Vietnamese market and only ranks 24th – third among European airlines after both Turkish Airlines and Aeroflot, but ahead of Lufthansa. Although the airline has upgraded its Ho Chi Minh City service from Paris CDG to non-stop, having previously operated via Bangkok, Air France dropped its route to Hanoi a year ago. 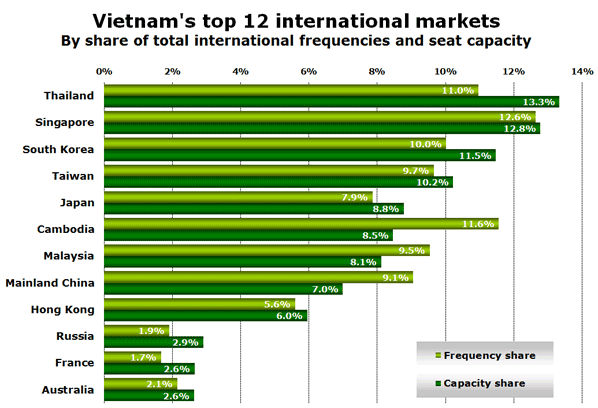 There is no dominant market served from Vietnam, but the top four international markets each have a share of over 10% of total international seat capacity. Although there is somewhat more capacity to Thailand – where a number of long-haul routes stop over – the aircraft sizes are bigger and frequencies are therefore lower than on the routes to Singapore. Neighbouring Cambodia and to some extent Mainland China stick out for its high-frequency services on lower capacity aircraft.

Several high-profile routes have been launched to Vietnam since last year’s summer, including four intercontinental services. Qatar Airways’ and Turkish Airlines’ new routes operate as stopping services via Bangkok, while LOT Polish Airlines and Aeroflot have launched non-stop operations. The major growth in new routes has, however, come from within Asia.

Next week, Vietnam will for the first time be connected non-stop with the UK as Vietnam Airlines launches flights to London Gatwick from both Ho Chi Minh City and Hanoi. Another new intercontinental route scheduled to launch at the end of this year is AeroSvit’s Kiev Borispol flights to Ho Chi Minh City, which also connects previously unserved airports. Each of these new European routes will be operated twice-weekly.