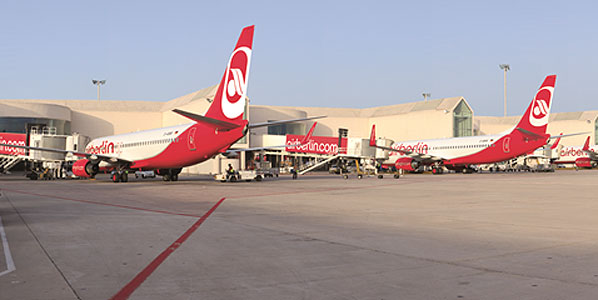 With airberlin under a new management team and looking to improve profitability even its treasured Palma hub has not been immune to significant cuts: current data suggests that flights in December have been reduced 27%.

Palma de Mallorca in Spain has been identified as one of airberlin’s four major hubs (along with Berlin, Düsseldorf and Vienna), although unlike these other bases the airline does not station any aircraft or crew there. According to AENA data airberlin and its Vienna-based subsidiary niki handled just over seven million passengers at Palma in 2010, representing almost exactly one-third of all the airport’s passengers. Its nearest rival Air Europa carried just under 1.9 million passengers, while Ryanair (1.6 million), easyJet (1.1 million) and Spanair (1.1 million) were the only other carriers to transport over one million passengers at the airport. While airberlin’s share of passenger traffic was 33% for the year as a whole, this increases to 46% during the winter season when other carriers operate far fewer flights. 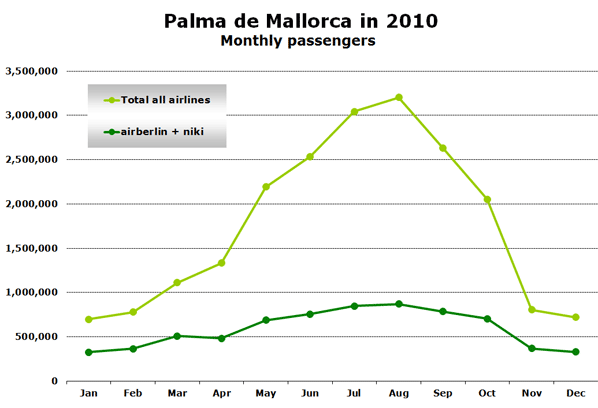 Palma flights down 27% this month

With airberlin under new management and looking to improve profitability, even its treasured Palma hub has not been immune to significant cuts. According to OAG data, flights to and from Palma were down a modest 4.3% in October and a more significant 12.2% in November. However, current data suggests that flights in December are down a massive 27%. 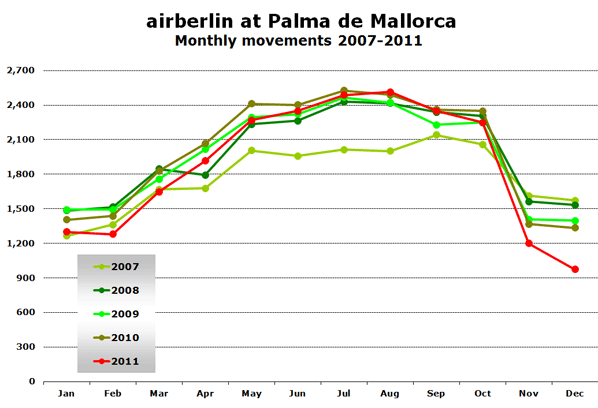 During the summer peak season (April to October), airberlin and niki combined served a total of 47 destinations from Palma, of which 17 were in Spain or Portugal, 21 in Germany, five in Austria, two in Switzerland, plus Amsterdam and Copenhagen. In the past airberlin has also served Palma from the UK (London Stansted) and Italy (Milan Bergamo).

However, in December, the number of destinations served has fallen to 34 down from 39 in the same month last year. Destinations ‘dropped’ for this winter are Amsterdam, Basel, Dresden, Graz, Karlsruhe-Baden and Murcia, while Saarbrücken has been added. Most of these are likely to see service resumption next summer. 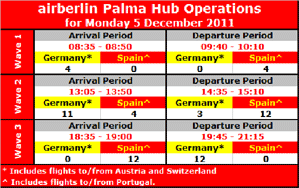 A closer look at the airline’s scheduling reveals that airberlin’s Palma hub consists of three ‘waves’ of flights. Analysis of a particular day (Monday 5 December) shows how the airline manages its Palma operations. The morning wave sees four flights arriving from Germany with all of these aircraft then operating a return service to somewhere in Spain. The second early afternoon wave sees the Spanish domestic flights returning to Palma and additional flights arriving from Austria, Germany and Switzerland.

This is a busy period with some 15 arrivals in a 45 minute period. Three of these arrivals head back to Germany while the rest head back to the Spanish mainland (or Portugal). The final wave sees these flights return to Palma (12 flights scheduled to arrive during a hectic 25 minute period) and then head home to Germany (or Austria, or Switzerland). A mix of A320s, A321s and 737-800s operate these services. For full details of routes, timings and aircraft types for Monday 5 December, click on the link below for the downloadable spreadsheet.

During the summer season, operations are considerably busier with more destinations served and higher frequencies, but the three ‘wave’ pattern remains with many flights arriving and departing in the first wave. 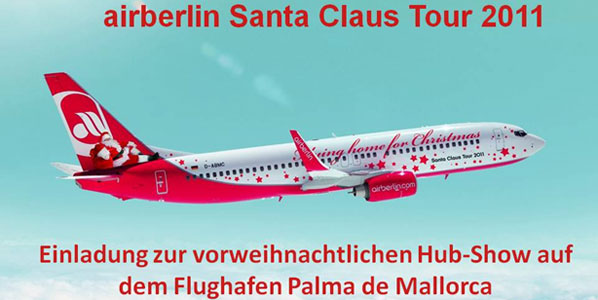 airberlin's Christmas-themed 737-800 will operate on several routes throughout the festive season providing a dedicated inflight service including entertainment by 'Klaus Santana' and an elf who was specially selected by audition on airberlin's Facebook page. Besides free Christmas tree carriage, the full service airline now also offers complementary mulled wine on all German domestic flights. anna.aero has been invited on this 'Pre-Christmas Hub Show' at Palma de Mallorca and we have also just returned from an adventure to Seattle as guests of airberlin where we visited the Renton plant to take delivery of a brand new 737NG. You can read all about these amazing experiences in a forthcoming special edition of anna.aero.