Non-identical twins: Ryanair’s London Stansted base is the biggest measured by routes (94 versus 69)…but easyJet at Gatwick is much bigger when measured by weekly departures (735 versus 631)…however, because of different aircraft sizes, the number of weekly seats offered is almost identical with the difference being less than 1%!

In our recent analysis of Turkish Airlines, anna.aero revealed how the airline was now serving more destinations non-stop from a single airport (170 in total from Istanbul Atatürk) than any other airline in Europe, having now established a significant lead over its nearest Star Alliance rival; Lufthansa at Frankfurt. But what about Europe’s low-cost carriers? Which are their biggest bases this winter? Well, it depends on what measure of ‘size’ is chosen. In terms of destinations served non-stop, then Ryanair’s London Stansted base continues to lead the way, despite the airline’s well-publicised decision to ground 80 aircraft this winter. In fact, since last December Ryanair has increased the number of destinations served from Stansted from 92 to 94, according to OAG data. 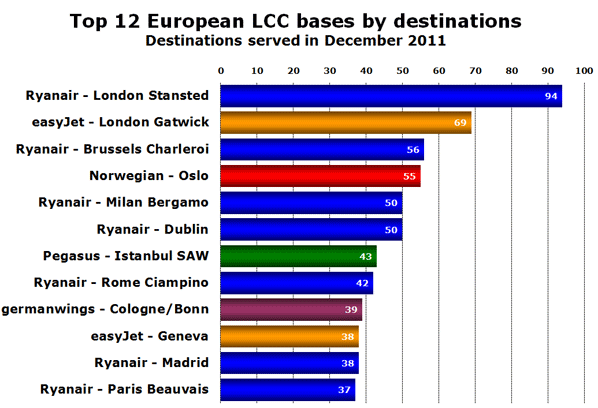 The net gain of two routes is actually achieved by nine destinations being served this December that were not served last December, and seven destinations where the opposite is true.

Of the ‘new’ routes Barcelona, Leipzig, Marrakech, Thessaloniki and Vilnius are genuine new routes that Ryanair has started for the first time in 2011, while Malmö flights have been resumed after a gap of four years. The remaining four routes are existing summer routes that are now operated for at least part of the winter season.

By this measure, easyJet’s London Gatwick trails in some way behind with 69 non-stop destinations this winter. Of the top 12 European LCC bases, as measured by destinations served, Ryanair accounts for seven with Brussels Charleroi (third), Milan Bergamo (fifth), Dublin (sixth) and Rome Ciampino (eighth) all making the top 10. It is worth noting that Ryanair’s seventh biggest base, at Paris Beauvais, is not actually a designated base, as no aircraft or crew are stationed there. Apart from easyJet (whose Geneva base ranks 10th) and Ryanair, just three other carriers each have one base in the top 12;  germanwings (Cologne/Bonn), Norwegian (Oslo) and Pegasus (Istanbul Sabiha Gökçen).

easyJet’s London Gatwick base is biggest in terms of flights

If instead of looking at destinations served, the number of weekly departures is used as the criteria, then Ryanair’s London Stansted base falls into a second place, 100 flights behind easyJet’s London Gatwick base. 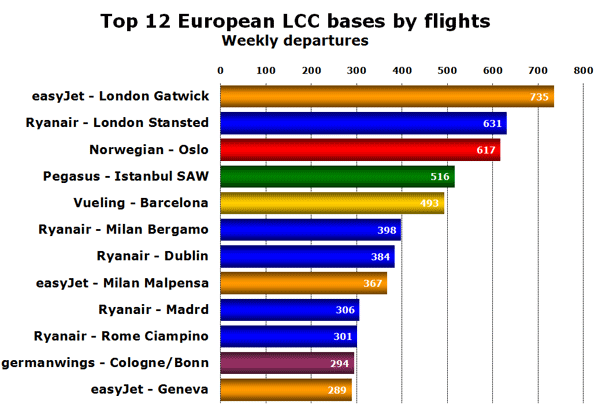 Indeed, in terms of flights, Ryanair’s Stansted base is even threatened by Norwegian’s Oslo base for second place. However, taking into account aircraft size (easyJet operates mostly 156-seat A319s compared to Ryanair’s 189-seat 737-800s), the number of seats flown each week is almost identical with the difference being less than 1%, marginally in Ryanair’s favour.

Compared with the first ranking, Ryanair’s Brussels Charleroi and Paris Beauvais bases drop out to be replaced by easyJet’s Milan Malpensa base and Vueling’s Barcelona hub. Although London airports rank first and second, no other UK airports feature in the top 12, while Italian airports (Milan Bergamo, Milan Malpensa and Rome Ciampino) feature three times and Spanish airports (Barcelona and Madrid) appear twice. Germany, Ireland, Norway, Switzerland and Turkey each place one airport in the top 12.