Virgin America’s route network; which destinations have the highest (and lowest) load factors in 2010 and 2011? Virgin America’s latest destination is Puerto Vallarta, which is the third Mexican airport it serves from San Francisco, after Los Cabos (December 2010) and Cancun (January 2011). Cancun is also served from Los Angeles; however, Virgin America’s core network is still domestic, with New York JFK achieving the highest loads and Dallas/Ft Worth (so far) the lowest.

After a troubled and much delayed launch (in August 2007), Virgin America has now been operating for over four years in the US domestic market, as well as also operating a small number of international routes, the latest of which (San Francisco to Puerto Vallarta in Mexico) launched last week. With a fleet of over 40 A320-series aircraft, the airline still has less than 1% of the US domestic market in terms of seat capacity this December, ranking it behind Spirit Airlines but ahead of Allegiant Air. However, according to US BTS data, in terms of RPMs (Revenue Passenger Miles), which takes account of average sector length and load factor, Virgin America’s share of the domestic market in the last 12 months stands at around 1.3%.

With two bases in San Francisco and Los Angeles, Virgin America currently operates around 900 departures per week across a network of 15 destinations (flights to Palm Springs begin next week on 15 December) and, according to US BTS data, has seen annual passenger numbers rise by around 15% to 4.4 million in the 12-month period ending August 2011. Capacity as measured by ASMs (Available Seat Miles) has grown by almost 19%.

Using US BTS data for 2010 and 2011, anna.aero has calculated the average load factor by route of all Virgin America’s domestic routes from San Francisco and Los Angeles. Data for 2011 is from January to August. From San Francisco, the highest load factors are on transcontinental routes to New York, Boston and Washington. Services to Chicago O’Hare, which only began at the end of May, appear to be performing well with average load factors in excess of 81% so far this year. 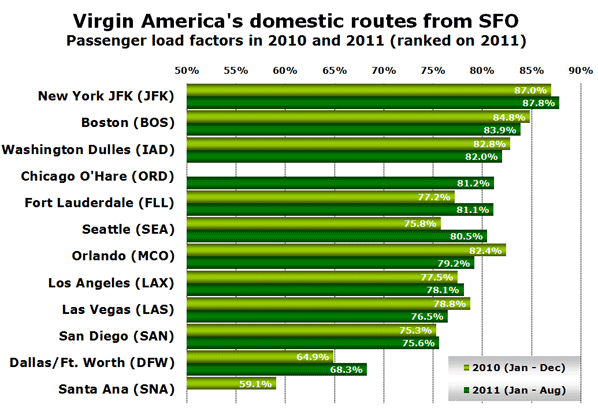 At the bottom of the rankings is Santa Ana (aka Orange County), a destination which was dropped in May 2010, followed by Dallas/Fort Worth, which only began last December. While the route’s poor performance in just one month in 2010 is understandable, its poor performance in 2011 will be more concerning to the airline.

A similar pattern can be seen on the airline’s routes from its Los Angeles base since the beginning of 2010. New York and Boston lead the way once more followed by the new Chicago service. Dallas/Fort Worth’s average load factor in 2011 of just under 71% is still more than five percentage points lower than on any other route. 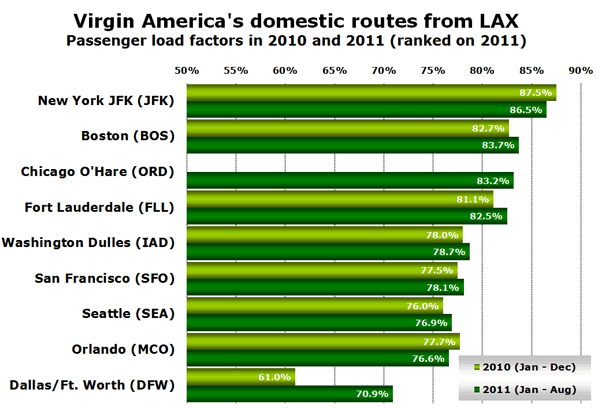 When will Dallas deliver?

When contacted by anna.aero about the performance of the Dallas/Fort Worth routes, Abby Lunardini, Virgin America’s VP Corporate Communications, told us: “As a relatively new market, we planned for some ramp up time for the routes to mature, especially given that it is a legacy airline hub and because Virgin America is brand new to the Texas market and has a unique, low-fare upscale product that flyers there may not be as familiar with. Secondly, because DFW is a legacy airline hub, we saw a pretty aggressive response to our entrance into the market from American Airlines, with the carrier adding additional flights in particular. Despite the competitive response, the reaction from DFW consumers to our product is strong – and we continue to see healthy load build in the market overall and are confident about its development.”

So far, the only routes that Virgin America has dropped are from San Francisco to Santa Ana, and its two Toronto services (from Los Angeles and San Francisco), which launched in June 2010 and were discontinued in April 2011.

Back in September, Virgin America teamed up with DreamWorks Pictures to create a unique integrated marketing campaign surrounding the launch of the new major motion picture Real Steel, starring Hugh Jackman. As part of the campaign an A320 named “Real Steel” was unveiled by the actor at Los Angeles International Airport featuring a larger-than-life image of the film’s “World Robot Boxing” contender “Atom” on the aircraft fuselage. 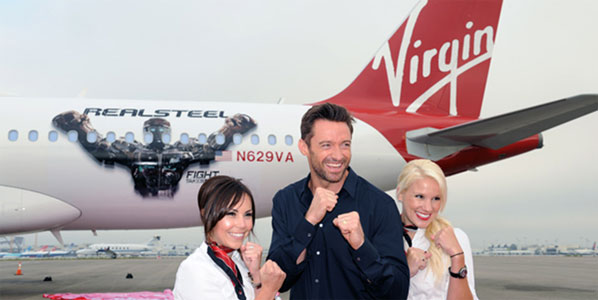 Hugh Jackman at the launch of the "Real Steel" A320 at Los Angeles International Airport back in September. The film, which opened in theatres in early October, is set in the near future when human boxing has been replaced by robot boxing. Virgin America aircraft make cameo appearances in the movie.