Azul celebrates third birthday with almost 10% of Brazilian market; growing by 80% in 2011, load factors still over 80% 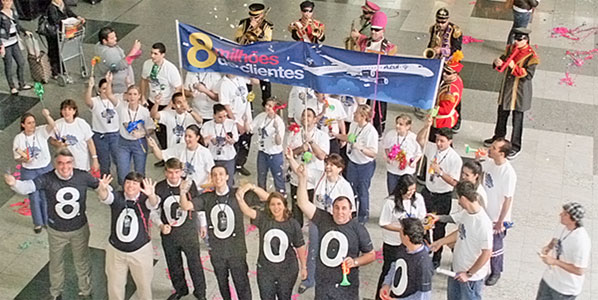 So four million last year...8 million in 2011....what Azul does more effectively than its larger competitors is fill its aircraft. In the first 10 months of 2011, Azul's average load factor was an impressive 81.8%.

Brazil’s third largest airline, Azul, celebrates its third birthday this week. In that time, it has already carried over 14 million passengers and seen its fleet grow to 43 aircraft; a mix of 24 locally built Embraer E195s (with 118 seats), 10 E190s (with 106 seats) and nine ATR 72s (including one of the new -600 variants, all equipped with 70 seats). While TAM and GOL continue to share between 75% and 80% of the domestic market (as measured by RPKs – Revenue Passenger Kilometres), Azul is now in a clear third place with between 9% and 10% of the domestic market.

What Azul does more effectively than its larger competitors is fill its aircraft. In the first 10 months of 2011, Azul’s average load factor was an impressive 81.8% (Source: ANAC), some 12 percentage points higher than GOL (69.8%) and TAM (68.7%), and this despite recording year-on-year ASK growth of almost 80%.

Neither of Sao Paulo’s main airports (Guarulhos and Congonhas) offered Azul much scope for rapid expansion when it launched, so the airline based itself at Viracopos-Campinas airport, an airport around 100 kilometres from Sao Paulo, which was previously primarily known as one of Brazil’s busiest cargo airports. At present, Azul serves 36 destinations non-stop from Campinas with these routes accounting for just over 70% of the airline’s total network capacity (in terms of weekly seats). 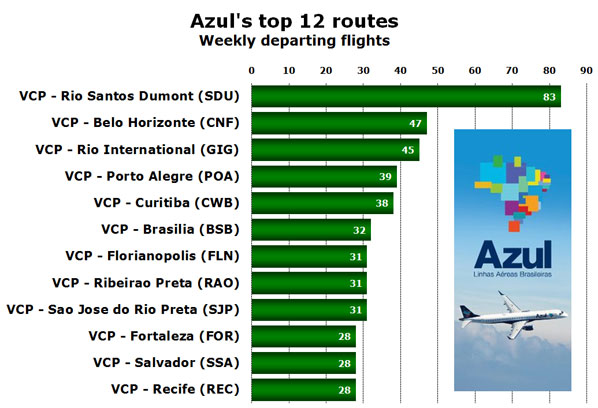 The airline’s third busiest route to Rio Galeao Airport only launched in February of this year. In total, the airline operates from over 40 airports in Brazil and recently added a new twice-weekly service from Viracopos to Caldas Novas (CLV) and then on to Goiania (GYN).

According to an interview last week by Bloomberg BusinessWeek, Azul’s CEO and founder David Neeleman (who also launched JetBlue in the US), has indicated that he expects Azul to grow faster than GOL and TAM in 2012. The airline expects to receive eight Embraer jets next year as well as 14 ATR 72-600s, some of which will be used to replace the older -200s the airline currently operates. This would bring the airline’s fleet up to around 60 aircraft.